“Destiny” and “fate” aren’t words to be used lightly, but in the case of the Carousel of Smiles story, they might be the only appropriate descriptors.

When Clay and Reno Hutchison went on their second date at a carousel in the ‘90s, Clay admitted he could have never known that Reno’s love for the machines would bring them to where they are today. 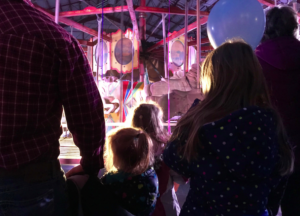 A family watches as the Carousel of Smiles is unveiled to a large crowd. Photo by Lyndsie Kiebert.

The journey to fulfill Reno’s dream of restoring a Golden Age carousel — like the one she loved during her childhood in Butte, Mont., that later burned down — led the couple into a seemingly fateful situation.

In Hutchinson, Kan. — the seat of Reno County — a carousel the same model as the one in Butte lay packed away in two trailers on a sheep farm.

It had been nearly five decades since the complete machine had seen daylight. Reno purchased it in 2000.

The trailers made the journey to Sandpoint last year, and since then a non-profit, The Carousel of Smiles, has been formed to take over the carousel’s restoration and eventual placement, which Clay and Reno hope will be in Sandpoint.

The 1920s carousel had its official unveiling last weekend at the Bonner County Fairgrounds. The Hutchisons reported that about 1,000 people came out to see the carousel spin for the first time since 1952.

Two of those people were Gerri and Jim Daniels, who said they enjoyed learning about the history of the carousel in the informational exhibits at the fairgrounds, as well as looking at the architectural mock-ups of the carousel in a number of locations, including Sandpoint City Beach.

Gerri said she feels a bit of nostalgia when she considers having a carousel in Sandpoint because she enjoyed them so much as a child.

“I love the idea that they are reviving it and they’re bringing it to such a lovely place,” she said. “The history is fabulous, and the stuff that they’ve all collected is mind-boggling.”

Opportunities to volunteer include the “Gear and Grease Gang” — headed by locals Nate Helms, Ken Keeler and Matt Janssen — as well as through wood restoration, painting and other, less-hands-on facets.

While addressing the crowd just before the unveiling, Clay highlighted and thanked a number of specific volunteers. He also noted that everyone in the community can do their part in any number of small ways.

“It can be as simple as just being enthusiastic about having the carousel in Sandpoint. That is every bit as important as the work that we’re doing,” he said.