North Idaho was covered in up to a foot of snow following a storm Tuesday night and Wednesday morning, leaving public works crews and emergency response workers scrambling to keep up. 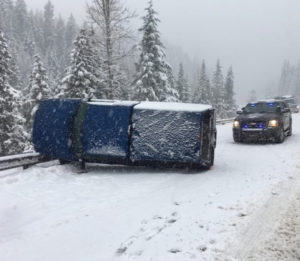 Clearing the snow on Wednesday morning proved as onerous a task as responding to the electrical outages and emergencies. Work began Tuesday with city crews deploying snowplows and graders throughout the day, keeping emergency routes clear. The city reached out to homeowners for assistance in keeping walkways cleared, reminding them it is their responsibility to keep snow and ice off sidewalks.

“Snow removal is a partnership between residents, business owners and the city. We appreciate the help and support of our residents and business owners in keeping our city accessible during the winter months, particularly for seniors, children and those with disabilities,” said Sandpoint City Administrator Jennifer Stapleton.

On Wednesday after a rest, city crews were back on the roads by 2 a.m. in an effort to get streets cleared before downtown workers arrived to start their workdays. The full 10-person crew went to work, operating three graders, two plow trucks, two loaders plus a third equipped with a snow blower, a sander and two skid steers, including one with a snow blower.

Work began in the downtown area, clearing the streets as thoroughly as possible given the cars still parked in the area. The wet, heavy nature of the snow also made it a work-intensive process, according to Stapleton. By 8 a.m., work progressed into the residential areas.

“Thank you to all of our residents and business owners for your patience and understanding,” Stapleton said. “It is appreciated by all of us at the city.”