Just as locals gear up for the tourist-heavy summer season, however, the city is preparing to give the downtown a visual upgrade that doubles as a window into the past. 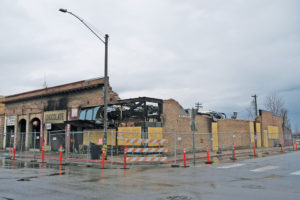 The scene of the First Avenue fire. Photo by Ben Olson.

According to Sandpoint City Administrator Jennifer Stapleton, the city plans to surround the fire damage with vinyl panels fitted onto the chainlink fencing blocking access to the destroyed buildings. The panels will be imprinted with photographs of historic Sandpoint, a project developed in coordination with the city’s Historic Preservation Commission and the Bonner County History Museum. It’s just one of the ways the city aims to honor Sandpoint’s past as it rebuilds from the fire, a process that resumes next week when authorities continue the investigation into the blaze.

“One of the most common requests we’ve heard (following the fire) is a concern that the historic look and feel of the downtown be maintained with any reconstruction,” Stapleton said.

The historic panels are one of a suite of beautification measures the city will undertake thanks to a $7,500 grant from BNSF Railway. The hope is to have downtown Sandpoint looking more inviting and attractive before Lost in the ‘50s this May. According to Stapleton, the measures are a recognition that anything limiting the downtown’s desirability as a shopping destination can bleed over into business bottom lines.

“Finding ways to mitigate the impact on surrounding businesses has been at the top of our minds,” she said. 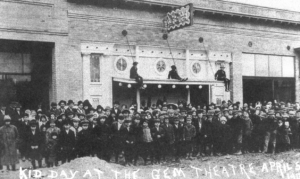 This historic photo showing children outside the Gem Theater is one of many selected for a downtown project. Photo courtesy Bonner County History Museum

Bonner County History Museum Curator Heather Upton was instrumental in moving the historic panel project forward. As a member of both the Historic Preservation Commission and an authority in Sandpoint history, she utilized the museum’s vast archives of more than 70,000 photos to find a selection that truly represented the downtown. From there, she worked with the city to narrow down a final selection. The photos will be printed onto vinyl panels that will give visitors a more appealing visual than ruined buildings.

“When people are walking by, they’ll get to think about the history rather than the unfortunate incident that happened,” Upton said.

“It’s been a really fun time for me working with the city, and I feel it’s been very rewarding to participate in a project other people will get to see and appreciate,” she added.

The panels are the first step toward a downtown restoration in keeping with its historic nature. The city is also putting together a citizen’s advisory committee on historic preservation. Envisioned as a committee of 10 to 12 people, it will offer advice and guidance in protecting downtown Sandpoint’s historic roots. While the city is especially looking for people with an expertise in building, architecture and local history, anyone with a passion for downtown Sandpoint is welcome to apply. To put your name forward, either apply in person at Sandpoint City Hall or use the Engage Sandpoint mobile app and hit the “Get Involved” button.

A previous version of this story misreported the amount of money the city received from a BNSF grant. The correct amount is $7,500.