Wendy Thompson, a Language Arts teacher at Forrest M. Bird Charter High School, recently challenged one of her students to write about high school in a humorous way. The student, who has written multiple articles for the Reader under the pseudonym Alexandra Blackwood, submitted the following article, and Thompson wrote a reply from the teacher’s perspective. We thought it would be entertaining to place both pieces side by side to see two hilarious differing viewpoints of high school. 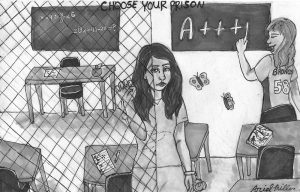 “The Humor of High School”

It’s a well-known certainty. Deep down, we all remember the grueling trauma that was, and still is, high school, perhaps the stupidest concept known to man. We continue to accumulate adolescents together in a facility, make them dress in appropriate attire and sentence them to four years of hell. Carefully observed under the guidance of faculty advisors, prison guards stalk the hallways in hope of witnessing weary rebels.

It’s the awkward stage of life, that period everyone hopes to forget. That cringe-worthy sensation that comes over you as you gaze upon your old school photos. You think silently to yourself, “Did I really wear that? That’s what I thought was cool?” Naturally, the era is broken up into its various sections, as all unadjusted, awkward, emotionally imbalanced teens will most certainly remember. The unusual secretary in “Ferris Bueller’s Day Off” summed it up best: “Oh, he’s very popular Ed. The sportos, the motorheads, geeks, sluts, bloods, wastoids, dweebies, dickheads—they all adore him. They think he’s a righteous dude.”

Although a bizarre and strangely hilarious quote, it captures a very constant factor in high school: humanity. The human experience of high school remains relatively the same even as the technology and curriculum change.

Mankind never changes. It may learn, it may develop, it may flourish or fall, but it never changes. High school is the same ludicrous idea since the moment it was invented. Teenagers squirm in a mass of other teenagers, dissected and dispersed into their own sections: the jocks, the nerds, the loners and outcasts, the goths and emos, the princesses, the populars. Over the course of decades and decades, teenagers remain the same.

It is as though adults didn’t know what to do with them. Elderly citizens hate them, middle- aged men and women tolerate them, kids simply don’t understand them. So, I suppose one day, many, many years ago, a group of adults began to congregate, pondering over what to do with these lousy barbarians, not quite children, not yet adults. Thus, they concluded, “Let’s all make them do jail time together!”

And so high school came to be. Four years of long torment for many, and yet, there are those who found it four years of frolicking, thrilling excitement. Everything they had ever wanted themselves to be. We call them the populars, the Barbies, the plastics: The rich snobs who wallow in their own pleasure, only to be drowned later on in life by their previous choices.

Personally, I cannot conceive the idea of high school. It’s the idea to form a union of the most unstable, awkward, and bizarre individuals all together, while masquerading in another name. Call it as many names as you like, but I see it in merely one form: jail. Yes, indeed, high school passes under the statement of, “Eat or be eaten.” It’s a free-for-all, a wild dog fight. Only the best of us will come out alive.

It is then that teens begin their transitions into dulling their minds, becoming the numb skulls they truly are. After all, no adult can be complete without their copy of, “The Philosophy of Stupid: An Idiot’s Guide to Life, Liberty, and the Pursuit of the Dim Witted.” That’s right, because even our mentors must appeal to society’s standards, as they too disperse themselves into individual categories.

As far as teachers are concerned, many do exist in the most unusual forms. My personal favorites are those who believe to be strict, disciplined and highly structured, but in reality they are scoffed at by the majority of students, as only we can see the buffoons they truly are. However, types of teacher also include the lazy teachers. Those that provide visual media and documentaries and all-multiple choice tests as to limit their exposure to grading.

There are the sweet kindergarten teachers, who talk in a feeble tone, meek and kind—perhaps too kind to be instructing a class of disrespectful and rowdy teenagers. Worst of all though, I must admit, are the fake teachers. Those teachers that you desperately want to smack alongside the face, but force yourself not to. The teachers that even as you squirm in your chair, you can’t help but feel that frothing rage intensifying inside of you. Yes, that’s right. I’m talking about the false teachers.

Those teachers that act sweet and kind, who talk in a high- pitched voice and behave so annoyingly calm, but are beyond agitating. Although I could progress further, I’m certain you all know who I am referring to. We’ve all had them.

And so, I suppose “The Breakfast Club” best interpreted high school and its quirky, ironic, wacky means of torture. Even now I can see John Bender thrusting his fist into the air, the defiant smirk hinted upon his face. Because that is high school. The unforgettable twists and weaves that make it what it is and always has been. For it is the best guide to “The Philosophy of Stupid.” And with that note, I leave you all with a single sentence, one that I hope is meaningful and direct in the best of terms.

Have fun in high school, kids.

Alexandra Blackwood, age 16, is a previous Reader contributor who has composed multiple articles prior to this year. Preferring to be addressed by her pseudonym as to conceal her identity, she currently attends Forrest Bird Charter High School, and is a resident of Sandpoint, Idaho.

Opportunity like never before abounds before them. Build an airplane for credit. Hey, get your pilot’s license for credit. Work with the animal shelter. FREE college for high school students. Just have to pass to continue onward. Just have to want to pass. Just have to want. Oh, they want all right. They want water and toilets, no homework and girlfriends. Food. And more food. And get-going-so-fast-you-can’t-think caffeine. They want freedom on Fridays after school until 11, at least, and time to play video games before they get to their homework. They promise, they will get to the homework. They want to succeed without exerting. They want money. Lots of money. Lots and lots of money so they can buy their freedom.

Few realize the freedom is inside this “jail.” The freedom is in knowing they don’t need what they want. The freedom is in the knowledge they acquire through education. Learning how to think. Looking at problems, from algebra to germs to essays, and copulating those dendrites into let’s-make-this-world-a-great-one proportions. Yeah, yeah, they say. Whatever.

It’s a fast-paced world out there. Better suck it up and get used to PG movies flinging the F bomb around like green bean salad at Thanksgiving, with neighboring states advertising desirable flavors and effects of the #1 gateway drug, with boobs hanging out of TV screens, with presidential candidates vowing to blow up nations, with friends killing themselves, with parents gambling until midnight, with locking car doors at Spokane intersections, with not walking alone at night, with belligerence toward police, with calling a best friend, “bitch.” Because that is the world today. That is what our children have to look forward to. More of what they already know.

And they think inside the school walls is jail? That’s what they want to think. That it is better on the outside. That what they think of the adult world now is going to be better when they get there.

But we know. It’s not like that. It’s worse.

Constraints happen as soon as they re-ooze themselves OUT the door. When the beautiful butterflies dance in the open air and are whacked to the ground with responsible adult reality. When they can’t afford to buy the gaming system and they can’t mutilate 87 zombies in three minutes.

High school is a time for our young generation to flourish. To do for themselves. To create a better, more intellectual, more social, more responsible citizen, future parent, and human being. The broader one can think, the more capacity he or she has to achieve happiness. To not want. To be.

So, inside this “jail,” I live to serve you. It’s all about you, my sweet daffodil. I love you. Did you get that assignment turned in? What don’t you understand? How can I help you? When will your mom get back into town? When did you last eat? When is your game? Email tonight with any questions. You can’t choose your world later: It is there, waiting. But today you can choose to be doted upon and revered, worried about and loved. Take this freedom and fly! Learn and spin! Fail and smile and rework to understand. I will help you up after you fall, and I will boost you to fly. Jail? I need to be here. Because you’re here, and I love you.

Wendy Thompson is a golfing, pool-playing, gardening language arts teacher. After 29 years of teaching at area high schools and Ph.D.ing at the University of Idaho, she has found herself smack in love with the students, teachers, philosophy, and curriculum at Forrest Bird Charter School where she works and plays.