We’ve all learned about one major mass extinction event in school. The end of the dinosaurs, gone in a singular dramatic flash!

That’s not exactly true. While dinosaur extinction was a remarkably quick event on a geological scale, it didn’t occur the moment the asteroid smashed into Earth. So what would it be like to experience a mass extinction?

We’re about to find out. 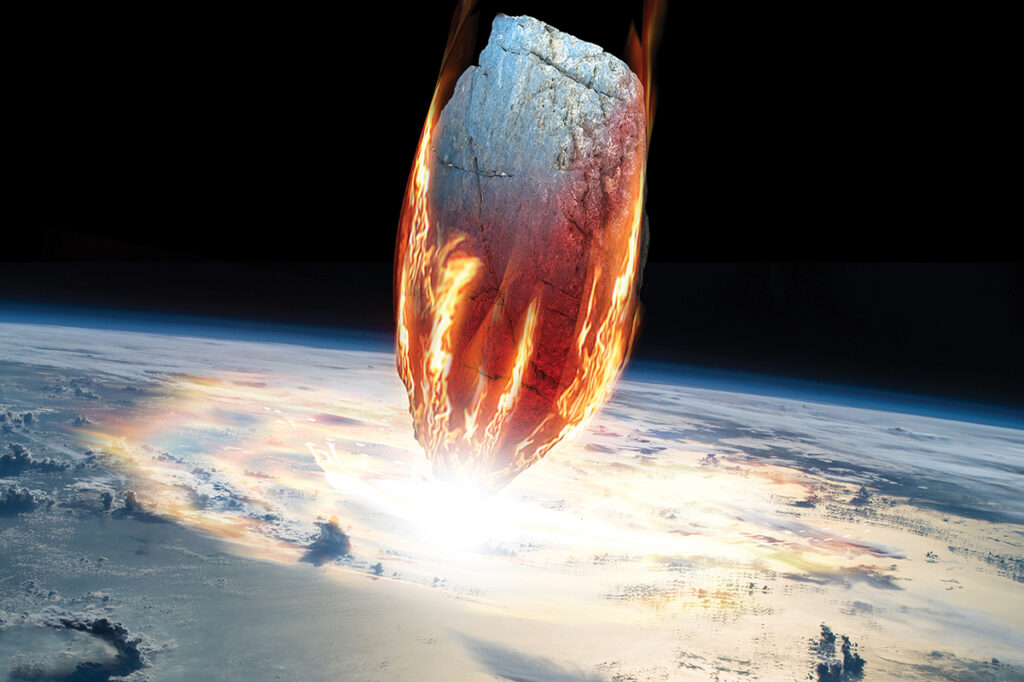 Earth has endured five mass extinction events, six if you count “The Great Oxidation Event” more than 2 billion years ago, and seven if you count the Holocene extinction we appear to be causing right now. Extinction is a terrifying prospect, but it’s a double-edged sword. Some forms of life have always evolved and adapted where other life has critically failed, and humanity as we know it wouldn’t have thrived if the Earth had not faced five extinction events before us.

Let’s examine the most famous of all: the Cretaceous-Paleogene extinction event, the asteroid that wiped out the dinosaurs.

The moments leading up to and immediately following the six-mile-wide asteroid’s impact of the Yucatan Peninsula in present-day Mexico were undoubtedly dramatic: A town-sized rock hurtling into the planet at 27,000 miles per hour, releasing the energy of both bombs dropped on Hiroshima and Nagasaki in 1945 multiplied by 1 billion. The crater left behind has a diameter of 121 miles, so it’s safe to assume that the superheated shockwave traveled at least that far, though it likely caused a massive rippling effect across the entirety of Earth’s atmosphere many times over.

All flora and fauna caught in the shockwave were instantly incinerated. The asteroid aerosolized sulfur and carbon deposits beneath the impact zone and sprayed a cloud of molten ejecta into space. This had two really nasty effects that would play out in the hours following the impact.

First, larger chunks of debris rained back down, heating up due to atmospheric drag — this is the same effect that makes spacecraft appear to catch on fire during re-entry into Earth’s atmosphere This heat not only scorched anything it touched, but it released into the surrounding atmosphere as it traveled, elevating temperatures for hundreds of miles around the impact site. The second effect was spraying huge quantities of dust into the atmosphere, a problem that was exacerbated by the searing rain of flaming rocks, which set forests alight on a global scale.

Carbon dioxide in our atmosphere acts a lot like a glass panel — letting sunlight through, but trapping heat inside. This is, at its core, why it’s called a “greenhouse gas” and where the bulk of issues from climate change originate.

However, carbon has a funny effect when there’s an immense amount of it, such as smoke from every forest in the world being on fire at the same time. Sunlight is reflected off the smoke and can’t reach the ground, which causes a cooling effect. There have been multiple times when Earth has experienced this global cooling — particularly due to volcanic activity — kicking off ice ages after periods of relatively high temperatures. This is exactly what happened for at least a year following the impact, creating an effect called an “impact winter.”

Before anyone has a “eureka” moment about how to combat climate change, this was not beneficial for life on Earth at the time. This was the largest contributing factor to the ultimate destruction of the dinosaurs.

As Earth was choked by smoke, dust and chilled by a winter that may have lasted as long as three years, plants lost access to sunlight they desperately needed in order to survive. As delicate plants died, herbivorous dinosaurs ran out of food and began starving. As herbivores starved, carnivores lost their food source and began to starve as well.

Oceanic fauna weren’t sheltered from the effects of the impact. The vast amounts of sulfur blasted into the atmosphere caused sulfuric acid rains around the world, which drained into the ocean. This disrupted the ability of animals that made shells and exoskeletons from calcium carbonate, such as molluscs. This is called ocean acidification, and it’s something we’re seeing today as a direct result of human industry, as it damages crab, lobster and coral reef populations globally.

The real story of triumph in the wake of tragedy came from opportunistic hunters — that is, carrion eaters and other creatures that were either pre-adapted or readily adaptable to their horrific new world. Crocodilians, which often eat carrion before they’re large enough to hunt on their own, were able to quickly pivot toward the sudden expansion of food sources. Meanwhile, smaller animals that required less energy to survive were able to adapt and outcompete larger creatures.

Fortunately for us, the extinction of the dinosaurs paved the way for the Paleogene period and the rise of mammals as the dominant species on Earth. Keeping that in mind, we have to ask ourselves this question: Are we currently paving the way for another species that will one day write about how fortunate it is that humans drove themselves to extinction?