Last week marked the latest in Bonner County’s wake saga, as county commissioners voted against extending no-wake zones from the county standard of 200 feet to 300 feet around marinas. 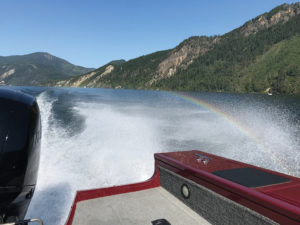 The recommendation, presented Aug. 28, came from the Bonner County Waterways Advisory Committee, tasked with presenting solutions to waterway-based issues to the commissioners. Over the past two years, the issue of wake and how it might be damaging shorelines has been a particularly hot topic.

Parks and Waterways Director James Shannon said the 300-foot marina rule’s purpose was to protect areas where boats are stored and could be damaged by wake. Commissioners voted 3-0 against the proposed rule.

“If people are violating the 200-foot no-wake zone, they’ll violate the 300-foot no-wake zone,” said Commissioner Dan McDonald. He noted that the suggestion is coming from one or two marina owners and would only create further confusion, especially for boaters visiting from out-of-state who are accustomed to a 100-foot rule.

A specific waterways subcommittee, created to address to wake issue, put forth a handful of suggestions during an April 30 public hearing. Those solutions included: Emphasis patrols (where Bonner County Sheriff Marine vessels patrol “trouble areas”), adding more mobile buoys to area waterways, funding the “Ride the Core” campaign (which encourages boaters to stick to the center of waterways rather than the shore), establishment of “wake surf areas,” increase of no-wake zone distance or prohibition of wake surfing on the Pend Oreille River west of Dover.

To date, 10 additional roving buoys have been approved, no-wake zone fines were increased in early July from $75 to $150 — with each subsequent infraction being $300— and the 200-foot law is also advertised on banners and fliers at docks and marinas around the county. The new buoys did not make it onto the water this season due to a manufacturing delay, Shannon said.

It’s been wake surfing under the microscope for much of the no-wake debate, as boats for the sport are designed to create larger waves. Wake surfing has also grown in popularity — Pat Holland, co-owner of Action Water Sports, said 80 percent of the lessons he gives are for wake surfing. He said the sport is low impact and easy to learn, attracting recreators from four to 70 years old.

“It’s a wide range of age and ability that can stand on the board,” he said.

Holland, who served on the subcommittee, said “the finger has been pointed unfairly at the wake surfing community.”

In the end, Holland said, his stance is one of increased education, enforcement of existing laws and reciprocated respect.

“Respect gets respect from both sides,” Holland said. “The water-using community needs to respect homeowners, but homeowners need to respect boaters who are exercising their right to use public water.”

Win Taylor, who owns property on the Pend Oreille River and said he’s seen damage from wake on his own shore, said he thought more patrols on the narrow part of the river would be a practical solution.

Taylor, who also served on the subcommittee, said that while many people say “rip-rap your shoreline,” that process is not cheap, fast or easy. He thought the subcommittee’s suggestions were worth considering.

“I found the waterways committee very civilized, and I think we found some common ground between surfers and property owners,” he said. “I thought reasonableness prevailed.”

Commissioner Jeff Connolly said the BOCC stands behind more education and enforcement in an effort to get everyone “up to speed on what’s going on in Bonner County” as far as no-wake zones go. He said the issue is bigger than one regulation change.

“A lot of people are trying to downplay it. They’re saying ‘just make it 300 feet,’ but the issue is bigger than that,” he said, adding that he hasn’t seen the science to convince him that extending the zone out another 100 feet would make much of a difference when waves reach the shore.

Connolly said he thinks the use of more buoys and increased enforcement in trouble areas next summer will help, before implementing any more regulations or making changes to current laws.

“Hopefully we make a statement that way,” he said. “There’s plenty of places to (recreate on the water) where you won’t affect anybody.”

Head of the Bonner County Sheriff’s Marine Division, Ed Jochum, said deputies have handed out over 30 no-wake citations this year. Two-thirds of those violations were by visiting recreators.

As boating season comes to a close, Jochum said continued education will likely help everyone get along on county waterways. However, he said, further regulations are up to the commissioners, if they choose to go that route.

“People just need to use common sense and be courteous — that’ll probably go further than anything,” he said. “We’ll probably never solve the wake issue, but maybe we can soften it.”