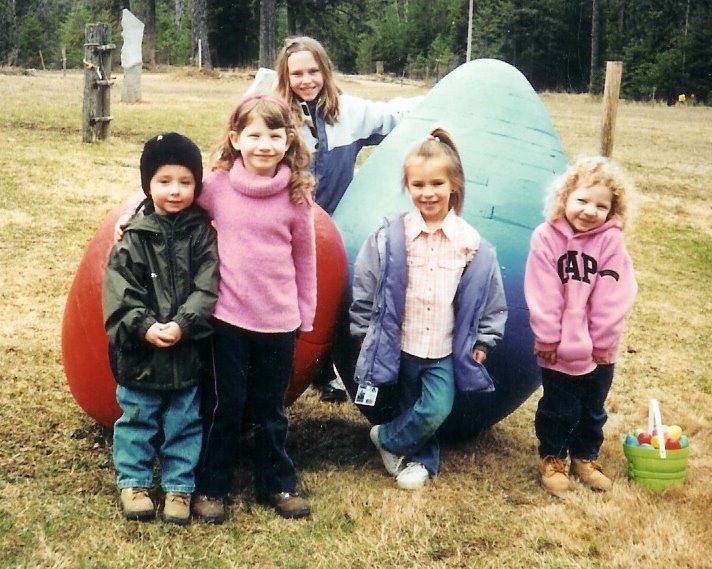 I was fortunate to experience both fake and real Easter eggs in my childhood, but also came across another variety: giant foam eggs, easily five feet across and three feet high laying on their sides, littered across my grandfather’s yard.

I distinctly remember the feeling of excitement while loading into the car with my sisters, empty egg buckets in hand. We’d speculate about how many giant eggs there’d be and in which colors. The sight of them as we crested the hill in front of my grandparents’ house brought a sense of wonder close to Christmas morning. It was our understanding that the Easter Bunny brought them and there are plenty of photos of us, our cousins and other neighbor kids posed in front of them.

With adulthood comes an understanding that just as parents help Santa, someone had to be helping the Easter Bunny with the giant eggs. I had someone in mind, and decided to pursue the truth.

A phone call confirmed my long-held suspicions. This man — a grandfather to close friends around my age — maintains that he is but the Easter Bunny’s humble servant, carrying out the boss rabbit’s requests to spread holiday joy to the children of Hope. It is vital that his identity remain concealed (with great magic connections comes great responsibility), so for the purposes of this article, we will call him EBA — short for Easter Bunny Assistant.

He can’t recall the exact inspiration for his gargantuan egg lawn ornaments, but remembers that he felt like doing something a bit mischievous.

“I had this impish idea about making a great big egg and putting it somewhere,” he said, noting that each Easter, he’d deliver his creations around 4 a.m.

EBA admits that his inclination toward large-scale creations is a natural extension of his professional work in carving stone; but, in the interest of anonymity, declined to comment further. The eggs, however, presented a unique challenge for EBA. He created them by gluing together large chunks of foam insulation, shaping the laminated pieces into an oblong form, then painting them various colors: green, blue, orange and more. He created one per year for about five years — each time attempting to master the elusive egg structure.

“An egg is a pretty universal shape, but when you try to do it a piece at a time, it doesn’t always turn out exactly the way an egg should,” EBA said, adding that the challenge of the task kept him beholden to the Easter Bunny, who expected perfection.

Those five or so eggs, in their rainbow-colored glory, have not appeared in the yards of Hope in recent memory. This, EBA said, is because the children who first enjoyed them are all grown — now in their teens and 20s.

“How would I know, I’m not the Easter Bunny, right?” he said, before showing his hand only slightly: “They’re in a secure location.”

Whether the giant eggs will again see the light of day remains to be seen. EBA said there might be something in the works this year, but “the Easter Bunny is a busy guy,” and they have not yet solidified their plans.

“When is Easter?” he asked me.

EBA was taken aback by the proximity to the holiday, but he quickly composed himself.