Sandpoint Reader: Tell me about your history in North Idaho. 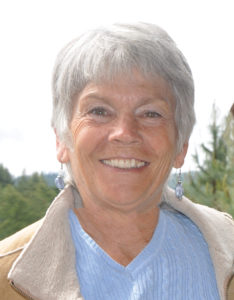 Patricia Wentworth: I moved from Everett, Wash. to Sagle in 2006 and haven’t looked back. I became actively involved with our community when I joined the Sandpoint Transition Initiative in 2007. That led to the opening of the Sandpoint Community Garden for which I’ve been the coordinator since it’s inception. Four years ago I began volunteering in the memory care unit at Luther Park. I became known as “The Bingo Lady” and developed a reputation among the staff and residents for my rather unconventional way of calling the game and my strong belief that humor is the strongest medicine there is, if only for the moment.

SR: What inspired you to run for a county commissioner seat?

PW: I was asked by Judy Meyers, a woman I met when I emceed the 2016 Democratic Caucus. She called and asked if I would consider putting my name on the ballot for County Commissioner District 1. I was surprised and hesitant, as I am really a behind-the-scenes supporter. The reason I said yes is there was no other candidate at the time and so I volunteered.

SR: What are the top three issues in Bonner County you plan to tackle if elected?

PW: I don’t plan to “tackle” any issue. I’m about listening and collaboration. People pretty much agree on basic human needs: living wages, healthcare for all, freedom of speech. I’d like to see more unity of ideas on how to accomplish those needs. I’m not a strict party politics person. Without differing ideas there’s no growth.

SR: There are some issues dominating the news in the county lately, like Scotchman Peaks Wilderness, the Newport smelter, the second rail bridge — where do you stand on these issues?

PW: I haven’t researched all of the pros and cons of these issues, but have found that the “for” or “against” are pretty much based on political party lines.

SR: What else should voters know about you?

PW: I’m a real fun enthusiast. If I can’t find enjoyment in the things I do, I pretty much don’t participate.

Patricia Wentworth AT A GLANCE

FAMILY: Three sisters and a brother

FUN FACT: I am an identical twin except in politics and religion, and we love each other anyway.