Playing in the backcountry means understanding — and respecting — local wildlife

A camper shot and killed a bull moose in self-defense at a Harrison Lake campsite on June 22, according to a media statement from the Idaho Department of Fish and Game.

“The camper hid behind a tree, but the moose did not stop charging,” IDFG reported. “The camper then discharged a firearm at the moose in self-defense from close range.” 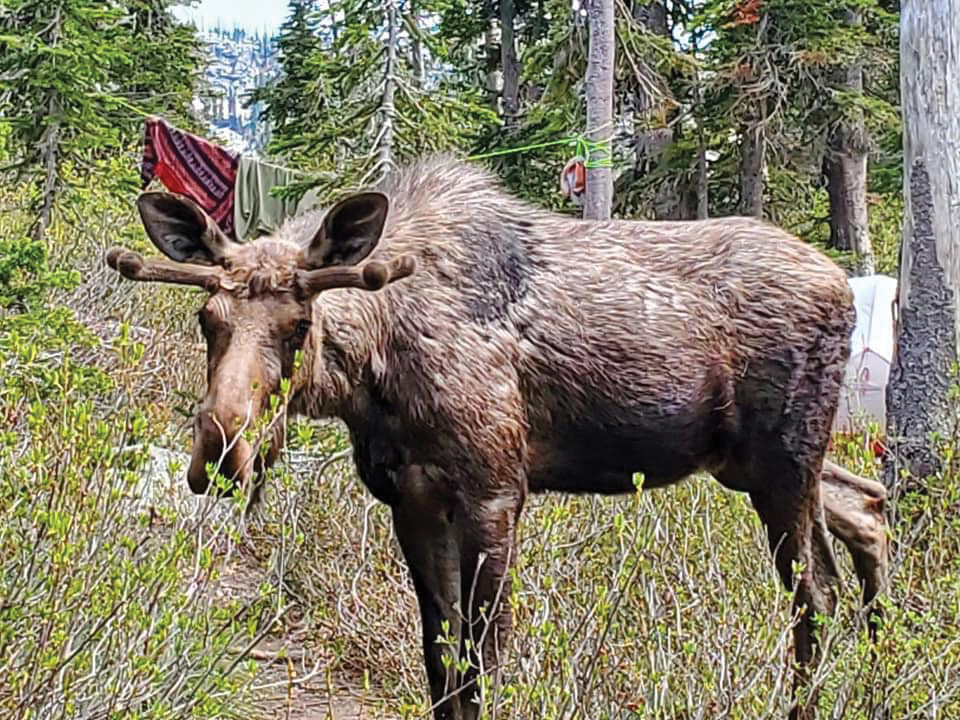 The bull moose that was killed was captured in this photo a week before the incident. Photo by Matt Wright / Facebook.

The moose succumbed to its injuries, and its body was left at the lake. The Forest Service has closed the trail at this time to keep hikers from coming in contact with bears or other predators feeding on the carcass.

While these kinds of aggressive — and deadly — encounters are not incredibly common, IDFG said certain measures can be taken to avoid a conflict reaching such heights. For one, IDFG said the Harrison Lake incident is a “good reminder to carry bear spray when hiking or backcountry camping.”

“Bear spray isn’t just for bears and can also be used as a highly effective tool against other mammals if an unsafe wildlife encounter occurs,” officials stated. “Be prepared when recreating outdoors and know how to use bear spray if necessary.”

Just like bears or other predators, moose can become agitated when they feel threatened. Signs that a moose is about to charge include ears being pinned back, hackles raised and a lowered head.

Dogs are seen as especially threatening to moose. According to IDFG, “the safest approach is to keep dogs on leash when recreating in moose country.”

Matt Haag, a senior conservation officer with IDFG in North Idaho, told the Reader that “most times” he responds to an aggressive animal incident, “it involves a dog.”

“Whether it’s a moose or a bear, every [aggressive encounter] that I’ve been involved in, it’s been a dog involved in it,” Haag said. “They just attract wildlife. If the dog is up ahead on the trail, next thing you know, there’s a bear or a moose and it’s chasing that dog right back to you.”

Haag said the number of annual encounters such as the one at Harrison Lake has remained steady over the 15 years that he’s been patrolling the Idaho Panhandle. However, with the influx of new residents and out-of-state visitors over the past couple of years, he said it is possible that we could see these things happen more and more often.

“I see a huge increase in people just being in the woods, no matter what it is — sight-seeing or mushroom picking or whatever,” he said.

When asked what advice he had for anyone spending time in the woods this summer, Haag said he wanted people to remember “that there’s other people doing other things and be respectful of them.”

“Respect the land,” he continued. “I see more and more trash and total disregard — hatchet marks on trees — it’s just stupid stuff. It doesn’t serve any purpose other than to destroy something.”

And it’s not just fellow humans we’re sharing the trails with — it’s our hooved and hairy neighbors as well. According to IDFG officials, avoiding encounters is as simple as letting the animals know you’re coming.

“When hiking, make noise to announce your presence so you do not surprise a moose, or any wildlife that can be dangerous. Do not hike or trail run with headphones or earbuds,” IDFG officials shared in a media release following the Harrison Lake encounter. “Most wildlife will give out some kind of warning sounds prior to an attack or aggression. Wearing headphones or earbuds eliminates your extremely valuable sense of hearing.”

Haag said making noise is an easy, mindful way to keep space between yourself and wildlife, and odds are that the animal has no interest in meeting you face to face.

“Just make noise, talk, cough, clap your hands once in a while so that things can hear you,” Haag said. “It’s the surprise encounters with bears that usually end up in a bluff charge or an attack. If they know you’re there, they will remove themselves from the situation.”

Those with questions about avoiding animal encounters, or who are wondering when the Harrison Lake trail will reopen, can contact the Sandpoint Ranger District office at 208-263-5111.