Electricity. What is it? Electrons moving fast along wires. Why wires? We make them, they’re conductive, they slip into places we want them to go with minimal fuss. Don’t get cocky. If you grab the wires and complete the circuit, you become the wires. Electricity hurts when you are the wires. How bad? It can stop your heart. Burns you from the inside out. Locks your hands into a fist. That’s bad, really bad when you want to let go of the wire. 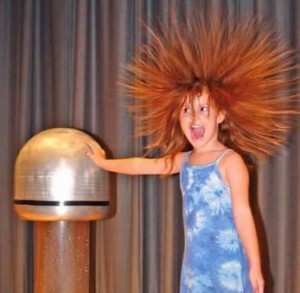 So electricity is bad? Only if you grab a lot of it. It powers everything. It makes the lights come on. Makes the computer work. Makes your phone work. It lets the blender make smoothies. It makes your car get you to the taco truck, and it kept their lights on. Electricity is good. Electricity is awesome.

How do you make electricity? You don’t. Energy cannot be created or destroyed, it can only transform. What? Example!

Turn a hand crank on a manual generator. It created energy!

It really didn’t. You ate some delicious tacos earlier. Your body gathered the energy stored from the delicious feast, and your body used that energy to transfer it into the manual generator to create electricity.

So why don’t we make a generator like the sun?

What’s Nuclear Fusion? It’s the sun. In a box. That sounds awesome, can I get one?

Sure! Have $20 billion? It’s complicated, but we’re getting there. Why is it so complicated? We can’t seem to figure out how to get more energy out of it than we put into it. There’s that Conservation of Energy law, again. Also, it’s hot. Not like your tacos. More like the sun.

What about lightning? Lightning is awesome. Lightning is huge, it’s fast. It’s electricity as provided by nature. They say it never strikes twice in the same place: That’s not true. So what if you’re struck by lightning? Well, I’m sorry for you, I hope you feel better. If you die, it will probably happen too fast for you to realize that you’re dying. It may be horrendously painful, we’re not really sure; we haven’t perfected the art of polling the dead.

Enough about that, talk about the lightning. How strong is it? That’s hard to say, no two bolts are identical. Not even close. We do know that it’s a lot. That 60- watt light bulb in your bathroom? The average strike carries enough power to equal about 166,666,666 of those running all at once. Line all of those bulbs up side by side, and they’d stretch for about 6,234 miles, just under 2,000 shy of the diameter of the Earth.

So much info, so little time. Check back next week. I promise I won’t talk like a goon from a Chicago noir movie in the ‘20s again.