Shannon Williamson, Joel Aispuro and John Darling were sworn in as Sandpoint City Council members Wednesday, ushering in a new year for the governing body. 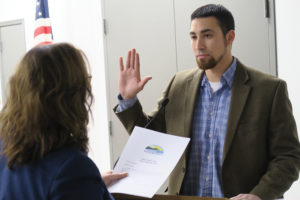 Following their wins in the city’s November elections, Aispuro and Darling began their first City Council terms after the ceremony, while Williamson started her second term. The reconstituted City Council then unanimously voted that Williamson continue serving in her role as council president.

“It would just be an honor to continue to serve as council president,” Williamson said.

Aispuro and Darling replaced Stephen Snedden, who was appointed to serve out a partial term when then-council member Shelby Rognstad was elected mayor, and Bob Camp on the City Council. A longtime council member, Camp received a standing ovation when he relinquished his chair.

Rognstad said it was a pleasure serving with Camp and praised his knack for independent thinking. 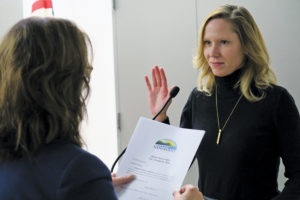 Reflecting on his time on the council, Camp said he believes he saw the transition from one era of Sandpoint history to another, particularly with the hiring of City Administrator Jennifer Stapleton and the adoption of new technology. He also commented on his experience overcoming pancreatic cancer three years ago and said how his faith sustained him. He hopes to see a return of the traditional invocation that opens a council session. 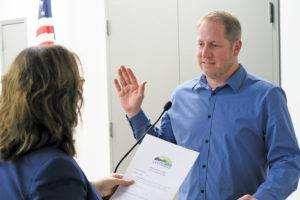 In keeping with his reputation, when it came time to vote on the consent calendar — a collection of routine agenda items that require council approval — Camp joked, “Do you want me to vote no?” before voting in its favor.