What a big and scary word. It sounds like something your insurance agent would repeat over the phone eight times trying to scare you into staying into your policy that’s growing with the speed and intensity of Jabba the Hutt’s waistline.

What is it, really? A little bit of everything, but you might know it better as luck, or more accurately: chance. The chance of something happening.

When we think about luck, we usually think about people who win the lottery, or conversely with bad luck, someone that lost their home or life to a once-in-a-lifetime disaster (because it wouldn’t really be once-in-a-lifetime if it killed them twice, right?). Luck is a primitive and fickle thing, and though we love our fair share of primitive items in Mad About Science, primitive human philosophies are seldom included! 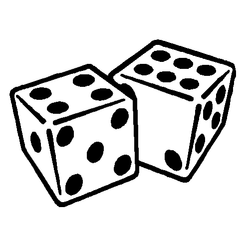 What we’re talking about here is chance, the probability of something to occur. Why is that interesting? Because it’s another opportunity to play the skim the large numbers game!

So what’s the chance of something like, say, winning the lottery? Most people have heard this figure before: one in 292 million, which means about a 0.0000000003424 percent chance per ticket. Saying it like one in 292 million pushes a button in the human brain that drives us to gamble, making us feel like an underdog by having a better chance at beating the odds. Not to say that you can’t win the lottery—you certainly can! It’s just ludicrously unlikely.

In comparison, what are the odds that you’ll be struck by lightning? That’s pretty rare, right?

The United States experiences a rough average of 1,000 lightning strikes per year, with an average of 50 being fatal. If you factor in 319 million as the U.S. population and divide that by 1,000, you’re presented with a 1 in 319,000 chance to be struck by lightning every year.

So how about slot machines at the casino or on my computer?

Slots are crafty. How do you regulate the rules of probability? This is done through a mechanic called RTP, or Return to Player. Casino slots are mandated differently from state to state to provide a payback of a certain percentage. What does that mean?

Let’s say you put $1 into the machine. Legally, the machine needs to give back, in the case of Las Vegas, at least 80 cents of it. But I lost my whole check the other night!

Ouch. I never said that 80 cents had to go back to you, specifically.

RTP ensures that the casino makes a flat profit, and it also ensures that they don’t blatantly rob you out of house and home unless you let them. It also creates the economy required to keep people coming back for more. The rules of probability still apply to these sorts of electronic games, but when it comes to computers of any kind there is always a catch.

A computer is not truly random. The term “random number generation” or “RNG”, “RNGesus” as gamers may refer to it, is actually a fib. What is random number generation? Look it up on Google, it’s basically just a script that spits out a number between two constants, like 0 and 100. The problem is, it’s not really random. Each number on the scale between those two points is chosen based on the time the script runs down to the fraction of a second, faster than our brains process information, thereby making it appear random, when it actually isn’t random at all.

If you were to fire up a number generator on your computer at 8:47:36.39929561314, and it spat out 8 as your number, then you waited until that exact moment the next night, it would spit 8 out again. I mean, good luck timing something like that, but it’s just how the scripts run.

Because of how a computer works, this applies to slot machines, too, and the developers and casinos know this. That’s why they’re updated very, very frequently. In the event someone found the proper time to exploit a jackpot out of the machine, they wouldn’t want the machine to just sit there and hemorrhage money to the same smarty pants night after night. When they update, they change the triggers, simple as that. It’s fair for the Casino, and it maintains an illusion of randominity for the player, which keeps them coming back to have more fun and maybe win big.

It just wouldn’t be a full post on probability without a shout out to the tabletop community. No, I don’t mean people that craft the tops of tables, though you guys rock, too. I’m talking about tabletop RPGs: “Dungeons & Dragons,” “Warhammer 40K,” things like that. You may know someone that has partaken in a night of drunken adventuring more than once in their life, and it probably looked pretty confusing at the time.

The basis of it all is the d20, or a twenty-sided die. Based on what number the die lands on, something interesting (or terrible) will happen to your party. Depending on the game, only the organizer (dungeon master, or DM) may see the number the die lands on, or all players can see. In games like Warhammer 40k, the player slings fistfuls of dice at the table and hopes for the best, adding another layer of complexity and probability to the equation.

Let’s say you want to make two rolls, and have them them land on 20 both times. That’s going to cut your chances in half, right?

Still not so bad, not like the lottery, anyway. What about three 20s?

Want to make a real game out of it? Take six dice like you’d find in a board game or a Craps table—standard d6, as gamers know them by. Think of what numbers you want them each to land on before you roll; I personally choose to have each one showing a different number, one through six.

Did you get it?

Let’s pretend for a minute that I did get it exactly how I wanted it to land, though. Awesome! I want to do it again, right away!

Any guess at the chances?

That’s right, with six dice, you can dwarf the probability of winning the lottery about six times over.