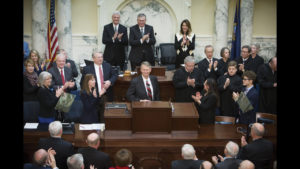 Little painted a largely optimistic vision of Idaho’s circumstances, highlighting its economic and population growth over the past several years. But he acknowledged that the state faces significant challenges as it moves forward, particularly when it comes to bolstering its education system.

“We have increased the budget for our schools by 32 percent,” Little said. “This past year, Idaho teachers received one of the nation’s largest year-to-year pay increases. As governor, I will continue our momentum and be an unrelenting advocate for educational excellence in our state.”

Little described education as his number-one priority and promised to establish a children’s cabinet that will advise him on education issues. The cabinet will consist of “traditional education stakeholders, parents and groups across our state dedicated to advocating for children.”

Little said he will continue to implement the state education task force’s funding recommendations and working toward the goal of having 60 percent of Idahoans between ages 25 and 34 hold a college degree or professional certification.

With 60 percent of Idaho voters calling for Medicaid expansion to cover the state’s uninsured population, Little said he would support full implementation. Notably, as reported by the Idaho Press, Little’s proposed budget doesn’t include funding for work requirements or other restrictions in its expansion plan. That means the Legislature will likely have to find and justify state funding for any restrictions if it seeks to implement them.

Little broke from his predecessor, C.L. “Butch” Otter, in supporting the repeal of the grocery tax. This state tax on grocery and food products is criticized by both the right and left as an undue burden on Idaho’s poorest residents.

Finally, in response to Idaho’s dilemma of overflowing prisons, Little proposes adding 220 prisoner beds at the new North Idaho Re-Entry Center and the St. Anthony Facility Expansion, as well as 17 new probation and parole positions for the Idaho Department of Correction.