Friends of Scotchman Peaks look past winter to trail season 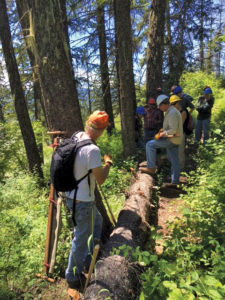 “The Scotchman Peaks Allstars work on trails in each District every year,” FSPW program coordinator (and trail crew boss) Sandy Compton said. “Last year, over the five month season, we put in 372 volunteer hours and 136 staff hours, did just over 12 miles of brushing and tread repair, reworked a couple of stream crossings and built or cleared a couple of hundred waterbars. We would have done more, but a couple of projects we had planned were cancelled because of the Cougar Fire in the Lightning Creek drainage.”

FSPW and trail partners in the Forest Service meet in the late fall each year to determine what will be done during the next year, with a multi-day project planned annually that rotates among the districts.

“Next summer, we have two big projects that are pretty exciting,” Compton said. “A group from Wilderness Volunteers is coming to do some badly needed maintenance on upper Little Spar Creek Trail #142 for a week in July. On the Sandpoint District, we will begin a couple of years of heavy maintenance on Goat Mountain Trail #35, including tread and switchback reconstruction.”

Most of the trails in the Sandpoint District portion of the recommended Wilderness will also receive some attention. The Scotchman Peak trail will benefit by the efforts of the FSPW trail ambassadors, many of who will continue to carry tools as well as educate the public about mountain goats. On the Cabinet District, Hamilton Gulch Trail #997 and Star Gulch Trail #1016 will benefit by the skills of the FSPW trail crews.

“Our crews do a great job,” Compton said. “We supply them with good tools and training and after-work refreshments, and they respond with enthusiasm to the work. One of the most satisfying things I can think of is walking back through the work we did at the end of the day and see what we accomplished. That and having a group of hikers say a heart-felt ‘thank you’ to the crew make all the work worth it. If you love trails, I invite you to join us”

FSPW will soon begin posting the upcoming trail work schedule on their website at https://www.scotchmanpeaks.org/stewardship/trail-projects/