Idaho Governor Brad Little announced April 15 that the statewide stay-at-home order would remain in place for another two weeks, extending to Thursday, April 30, at which time the order will be lifted unless there is an “upward trend of severe” coronavirus cases.

Little urged Idahoans to continue following social distancing guidelines, adding that the state will “be better positioned for a strong economic comeback because we are making difficult changes in how we live and work in the short-term.” 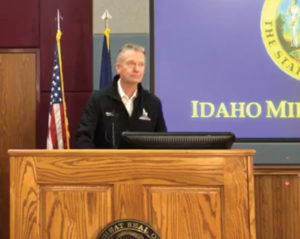 The governor has been on the record about his desire to see businesses thrive again while having to weigh the consequences of a premature reopening.

“Nobody wants to open the economy up more than I do,” Little said April 9 on the Idaho Public Television program Idaho Reports, “but what we don’t want to happen is to open it up and then have us go back to what we were worried about — have a surge, have overcapacity, have some people die.”

The powerful business lobby group Idaho Association of Commerce and Industry applauded the governor’s extension of the order and echoed his concerns about a “surge” in cases following a premature reopening of the state.

“If restrictions were to be removed too quickly, and the virus was to spread like wildfire through the population, then consumers would pull back drastically and for a longer period of time,” IACI stated in a news release April 15 following Little’s remarks. “We support the governor in not bending to political pressure, but putting people before politics and making decisions based on science.”

The amended order also mandates that non-residents self-quarantine for 14 days upon entering Idaho, excluding “those performing essential services or those who live in one state and work or gain essential services in another state.”

As the governor announced the stay-at-home extension via Facebook live stream, comments poured in nonstop. Some commended the governor’s decision, while many others expressed outrage at how the order would damage the economy, and whether such an order was constitutional in the first place.

Debate regarding the order’s constitutionality has been raging for weeks, sparked in large part by a letter sent April 2 by Bonner County Sheriff Daryl Wheeler to Little, in which he wrote that COVID-19 is “nothing like the Plague” and that “we were misled by some Public Health Officials, and now it is time to reinstate our Constitution.”

Rep. Heather Scott, R-Blanchard, is another local figure questioning the pandemic response — even whether the pandemic is real — describing the crisis in a newsletter as “The Virus That Tried to Kill the Constitution.”

Questions as to whether the stay-at-home order is constitutional continue to circulate throughout social media, despite confirmation from the Idaho attorney general’s office that Little has the authority to issue orders of isolation and quarantine.

Further muddying the constitutional waters, no less than President Donald Trump asserted at an April 13 press conference that his “authority is total” to force governors to lift stay-at-home orders to restart the economy. Those remarks drew widespread condemnation from governors, constitutional experts and even members of the Republican Party, resulting in Trump walking back his claims April 14, when he said, “We don’t want to put pressure on anybody. I’m not going to put any pressure on any governor to open.”

Meanwhile, the Idaho panhandle has become a hotbed of pushback to the governor’s stay-at-home order, as highlighted April 7 in a New York Times piece titled “A ‘Liberty’ Rebellion in Idaho Threatens to Undermine Coronavirus Orders.”

The story, which made waves nationwide, detailed the tension between elected officials and health care workers in Bonner County. As one local doctor said in the story: “Don’t take legal advice from a doctor, and don’t take medical advice from a sheriff.”

Little addressed the sentiments coming out of the panhandle at the April 15 press conference, admitting that he, too, has some “liberitarian” tendencies in his “DNA,” but that the COVID-19 crisis requires putting drastic measures in place to protect Idahoans.

“I’m always interested in hearing their input,” Little said. “Subsequent to [the letter from Wheeler], I got a letter from the entire [Idaho] Sheriff’s Association supporting what I’m doing. I have to do what I have to do for the good of the people.”

The governor’s office did not respond directly to the Sandpoint Reader’s request for comment on Wheeler’s letter or the New York Times article before press time.

“Let’s continue informing our citizens about the health risks and then, to the greatest degree possible, let them govern themselves,” Bedke wrote, adding that how Little chooses to “exercise legislative powers now will affect how the Legislature views those powers when it next convenes.”

Rep. Megan Blanksma, R-Hammett, shared similar sentiments in an email to Little and other legislators, according to Boise State Public Radio. She also tweeted in response to a Boise journalist: “Ok enough. This is not the plague. Stop treating it as if it is. Wash your hands and act like responsible humans.”

The culture of divided opinion in Idaho is becoming a trademark of the state’s COVID-19 response, as evidenced by comments made following the April 13 announcement of the Western States Pact  — a collaborative effort between Washington, Oregon and California to reopen their economies once social distancing recommendations cease. When asked whether Idaho was invited to join the pact, Washington Governor Jay Inslee noted the state’s lack of “unity.”

“I understand [Little is] having some controversy with his plans in Idaho, so we have that issue that he’s got to work through,” Inslee said. “We can talk to him. I see no reason not to do that … when he gets Idaho in a little more consensus position, I’d be happy to talk to him.”

Little said April 15 that he is open to communicating with bordering states’ governments, but that Idaho is “vastly different” and is unlikely to take the same approach as the denser-populated coastal states.

Little laid out the reality of Idaho’s altered social and economic state while appearing April 2 on Idaho Reports when he stated, “Life will not go back to normal for a long time.”

“I did not do this lightly. This is not my natural state at all. [Idaho is] the most unregulated state in the union — that’s my natural state — but the safety of the people of Idaho is paramount. I have the constitutional authority, I have it by code, but I am not using it all lightly. It’s a heavy responsibility to me,” he said. “[The stay-at-home order was] — from a scientific basis, and from a health care basis, and from a legal basis — the right thing to do, but it was a heavy decision for me to do it.”