Going for the Gold:

When most people retire, they plan to live quietly and catch up on the activities that eluded them during a lifetime of work. It was no different for Bruce and Karen Burnett, who, after vacationing in Sandpoint for three consecutive years, decided to buy a lot at Dover Bay and build their dream retirement home. Little did they know that Bruce Burnett, who has spent more than 50 years in the world of wrestling—the last 13 as the U.S. Naval Academy head coach—would get a phone call that would ultimately lead him to the 2016 Olympic Games in Rio de Janeiro.

Burnett is no stranger to wrestling. The 65-year-old previously coached the men’s national freestyle team for two Olympic cycles, which are considered among the most successful in U.S. history. From 1993 to 2000, the U.S. won World Team titles in 1993 in Toronto and 1995 in Atlanta—the only two times in history. The U.S. also won the medal count at the 1996 Olympic Games in Atlanta. 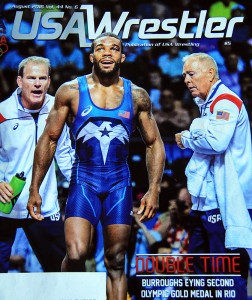 But all that was in the past as the Burnetts eased into retirement in Dover. Bruce planned to delve into outdoor activities, including golfing, fly fishing and riding his motorcycle, while Karen reacquainted herself with the piano—an instrument she has a deep love for.

Everything was going according to plan until they received a phone call from USA Wrestling Executive Director Rich Bender, who made Burnett an offer he couldn’t refuse.

“When Bruce had retired from the Naval Academy and went back to Sandpoint, my national teams director Les and I went to Sandpoint to try and recruit Bruce to coach the team through the Olympic games,” said Bender on the phone from Rio. “We were driving across the Long Bridge and I turned to Les and said, ‘We ain’t gonna get this joker out of here with a tractor.’”

Bender was faced with a dilemma. In the midst of an Olympic quadrennium, while most coaches were knee deep in training for the next games, the former national freestyle coach Zeke Jones had resigned to take a head coaching position at his alma mater, Arizona State University. Bender had to find the right man to take the team to Rio and fast.

“We toyed with the idea of going through a process and advertising and recruiting longer term candidates for the position,” said Bender. “Or, we could talk to Bruce Burnett, our most successful freestyle coach of all time, to come out of retirement and lead our team through Rio. We needed a coach who understood international wrestling and putting athletes on the podium at the Olympic Games. He was our first choice by far.”

For Karen, who has been married to Bruce for 14 years, the decision was not an easy one. In all things, Karen and Bruce are a team, and the decision to come out of retirement was something that they had to agree upon together.

“We had this plan put in place,” she said. “We were retired. We wanted to be [in Dover] full time. That was our goal.”

Karen said it was also a difficult decision because they were one and a half years into the Olympic quadrennium, and Bruce would get a late start.

“They really do train for four years,” she said. “Bruce hadn’t been following international wrestling that closely, and there are new rules in place. A lot of people don’t realize that about freestyle. It’s not like folkstyle in college.”

Folkstyle wrestling is the more traditional collegiate form of wrestling in the U.S. The main difference between folkstyle and freestyle wrestling used in the Olympics is that you can use moves from the bottom position in folkstyle, while freestyle allows no scoring from below the waist.

“It was a very hard decision,” said Karen. “My husband is a tremendous man of faith. He always said ‘We have to honor the gifts that God gives us.’ When it comes to wrestling, Bruce is a technician. There are components on the technical side of wrestling that he can get so quickly. It’s like he’s a savant in this one area of his life.” 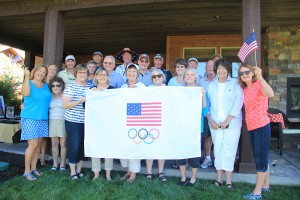 Karen Burnett, middle behind banner with white hat, stands with friends and neighbors in front of a banner they all plan to sign. Karen will hand deliver the banner to Rio in support of the men’s freestyle wrestling team. Photo by Ben Olson.

His first coaching job came in 1974 at Meridian High near Boise. Burnett turned Meridian into a state powerhouse, coaching four state title teams and four runner up finishes. His dual record was 154-13-2.

Karen said Bruce believed this was a God-given gift and it was his duty to honor it.

“He really wanted to retire, but he understood this is what he was called to do,” said Karen. “How could I not respect his decision?”

So Bruce began the arduous process of coaching the men’s freestyle team for Rio. Karen had to get used to him traveling to locations far and wide, such as Uzbekistan and Turkey, in the name of the sport he loves so dearly.

“Honestly, the first five or six months back were tough, but we got used to it,” said Karen, who hosted a party last week of friends and neighbors to sign an Olympic banner she has carried to Rio. Karen plans to get the entire men’s freestyle wrestling team to sign the banner as well and wave it proudly as they compete for the gold.

Bruce was not able to be reached for comment due to his heavy schedule in Rio, but he did tell the Spokesman-Review last year that he had high hopes for the U.S. team: “Americans train as hard as anybody. The U.S. has the tools to win. Russia has been dominant for so long, but we can beat them. That’s what drives us every day.”

To support Bruce and the USA Men’s Freestyle Wrestling team, tune in on Aug. 19-21 to watch them compete. Login to TheMat.com to find out what time each event will be aired.

Is there any chance that Bruce will stick around for another Olympic quadrennium? Not likely. He told the Spokesman-Review last year: “I’m not good at retirement, but this is my last hurrah.”

Bender didn’t pull any punches with his praise for the dedicated coach: “The cool thing about Bruce is not only is he one of the greatest coaches to ever sit in the corner of an athlete, but he is an even better person. He is a fantastic and wonderful coach and a leader of men, and we’re so fortunate to have him. His wife is a big part of that team. Together they are providing a fantastic service to our team and our country.”

After the games, Karen hopes her and Bruce can continue into retirement after this short, epic interruption. While she’s home, Karen plays piano at the Sandpoint Church of the Nazarene. After he returns from Rio, Bruce hopes to become better acquainted with fly fishing and has ordered a surfboard. He plans to attend surf camp in Puerto Rico.

“I am not going to surf camp, however,” said Karen. “This is not a team endeavor.”