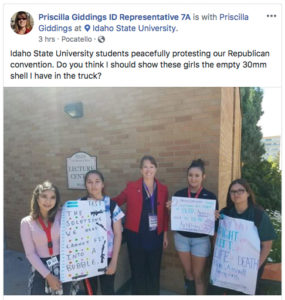 The post, which included a photo of Giddings posing with four college-age students, read, “Idaho State University students peacefully protesting our Republican convention. Do you think I should show these girls the empty 30mm shell I have in the truck?”

The girls were at the Idaho GOP convention in Pocatello to call for an increase in firearms regulation.

While Giddings’ supporters wrote the post off as a joke, many other Facebook users saw it as no laughing matter. Critics, most of whom lived out of state, flooded Giddings’ Facebook pages with negative reviews. As of Tuesday, the state representative had a 1.6-out-of-five rating on Facebook, with more than 1,100 reviews in total.

The post quickly gained traction after major national news outlets ran stories on the controversy. It also attracted the attention of well-known public figures, with the likes of Chelsea Clinton calling the post “monstrous.”

Giddings has developed a reputation for a provocative style of representation, following in President Donald Trump’s footsteps to establish Idaho “fake news awards.” She aligns herself with Rep. Heather Scott, R-Blanchard, in advancing a “liberty agenda” of deeply conservative-libertarian policies. After winning her primary election in May, the freshman legislator runs unopposed in November. She did not respond to a request for comment.