As it continues to move forward on the Comprehensive Plan update, the city of Sandpoint is seeking public input on housing and neighborhoods, hosting a drop-in workshop at City Hall on Oct. 26 and another scheduled for Thursday, Oct. 27 from 11 a.m.-5 p.m. at Tango Cafe in the Sandpoint Center at 414 Church St.

Among the topics to be presented are what housing types are allowed and where; zoning maps, including the future land use map under the current Comp Plan; and information specific to accessory dwelling units and how they are, or should, be permitted. 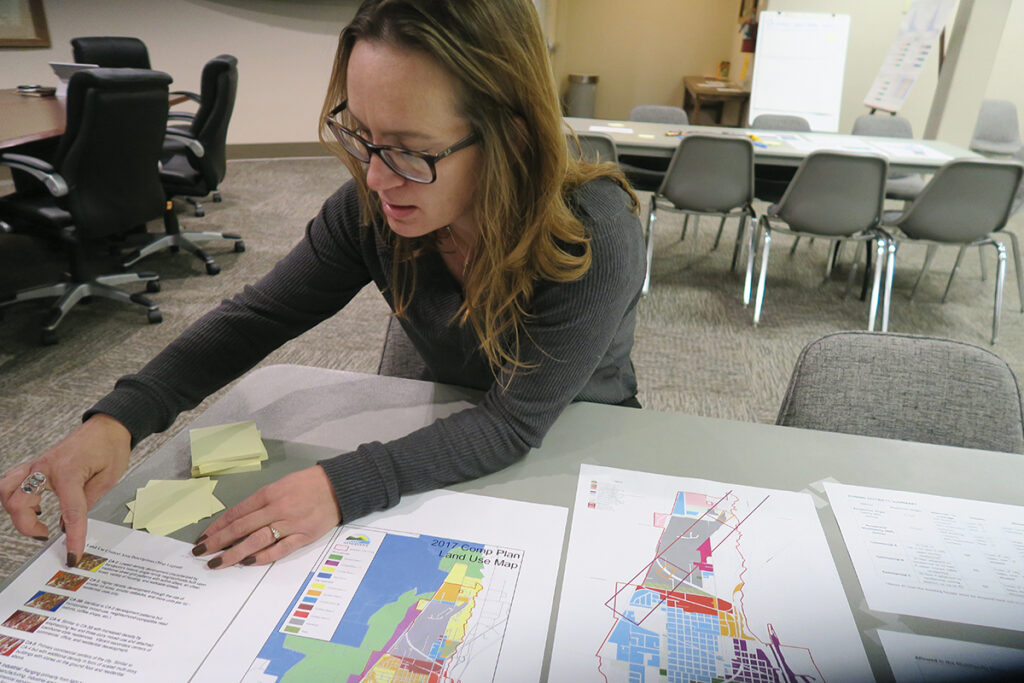 “This is a follow up to previous engagement that happened earlier in the Comp Plan process,” City Planner Amy Tweeten said at the Oct. 19 meeting of the City Council. “The purpose of this is both to provide information and get input back from residents. …

“We all know there’s a housing crisis, and what are different solutions and where can those go in the community?” she added.

The workshop includes several display boards showing the results of a 2019-2020 housing survey, as well as examples of different attached and detached housing styles and where they are allowed under current zoning. Attendees are invited to express their preferences for a variety of those styles using blue- or red-colored stickers on a question board, as well as leave sticky notes with hand-written feedback on what they like about their neighborhood and what could be done to improve it.

“This conversation is really rooted in when we talk about infill, what does that look like and where,” Sandpoint Infrastructure and Development Services Manager Amanda Wilson told the Reader at the Oct. 26 workshop at City Hall. “Getting that pulse will help us inform how we get into the weeds on the future land use map and regulations.”

Of particular interest is the question of accessory dwelling unit regulations, with the workshop featuring a mini-survey asking residents whether they support the current rules and what, if any, changes they support to them.

Other questions ask whether respondents support incentives to encourage ADU construction and conversion of existing structures into ADUs, if code changes should make townhouse lot construction more viable, whether building heights of two stories should be allowed in all residential districts and if the number of multi-family units allowed as a permitted use should be increased from the current limit of seven.

Wilson said one of the goals of the workshop is also to provide attendees with an idea of what’s allowed on their own block.

“Often people have no idea what zone they live in,” she said. “We have many neighborhoods that look like single-family homes but actually allow multi-family.”

That can — and does — often lead to unpleasant surprises when residents living on a street lined with one-story, detached single-family homes catch wind of a nearby multi-unit development rising two stories above their roofs. Wilson noted that even single-family homes can go up to 40 feet in height in the multi-family zone, which actually covers the bulk of the residential area east of Division Avenue.

“We’re trying to simplify this so people are versed in what’s currently allowed where they live,” she said.

Having that knowledge is intended to inform how residents think future development should unfold in their neighborhoods — and how those preferences can be incorporated into the revised Comp Plan.

And there is much to talk about on the housing and development front. Among the posters at the workshop is a summary of current and pending construction in the city, which includes 309 new residential dwelling units under construction — within seven active subdivisions and city-wide — as well as 33 commercial permits issued through September.

Tweeten presented on that topic in more depth Oct. 19 with an update on development and building.

In addition to current and pending construction, there are permits for 57 single-family residential units, 18 multi-family/mixed-use buildings and seven commercial/industrial projects under staff review. Coming soon will be four subdivisions totaling 100 single-family units, one planned unit development request for 227 units (Phase 4 of University Place, which will go before the City Council at its Nov. 2 meeting) and one rezone request for a 100-unit multi-family development.

If that sounds like a lot of development in the pipeline, it’s because it is.

Tweeten showed councilors a pair of bar graphs showing the number of permits issued and zoning applications received on a quarterly basis through 2022 alongside those same figures for 2017 through 2021.

The data on permits — which included building permits, zoning compliance and site plan reviews — showed a dramatic increase from 2020 to 2021, rising from about 240 to approximately 375. Already this year that number totals 325, which of course doesn’t include the fourth quarter of the year.

“We are ahead again this year,” Tweeten said, noting that Q3 2022 has greatly outpaced Q3 2021. Based on the graph, about 90 permits were issued during this time last year, compared to 145 this year.

By comparison, in 2017, the total number of permits issued barely exceeded 150.

The volume of zoning applications is even more dramatic. The city received just shy of 10 such requests in 2017. That number rose to about 44 by the end of 2021 and has already been exceeded, with 45 received as of the end of September this year.

“Do you know if any of these are actually going to be affordable to the low-wage earners?” she asked of staff. “What I’m finding now is a number of people — specifically younger people — who have tried to sign up for what people are calling ‘low-income housing’ and ‘affordable housing’ are finding that the salary requirements are from $46,000 to $125,000, and I would like to say that if someone is earning $125,000 a year, why are they considered low-income?”

Noting that “a tremendous amount” of city residents make below $46,000 per year, McAlister added, “I can’t wrap my head around ‘you don’t make enough money to be low-income.’”

Referring to a report on housing commissioned by the city earlier this year, Tweeten said, “The private sector or the market alone is not going to solve the affordable housing issue; it’s going to take a public-private partnership.”

Establishing the goals and objectives of the Comp Plan update will also play a big part in creating the conditions to address affordable housing, making participation in the Oct. 27 workshop all the more important, according to city staff.

“It’s a great time to pick staff’s brain,” Wilson told the Reader. “It’s kind of a unique opportunity to have a really in-depth conversation.”