If you’re interested in how to raise money for a good cause, ask Vicki Reich—she’ll get you started in the right direction. 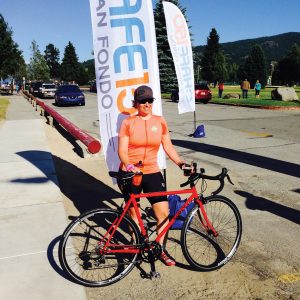 To win the bicycle, riders have to raise at least $4,000 for CHAFE 150. Before Reich came along, nobody had raised enough to win the grand prize. Then Reich won it two years in a row.

Reich hit the ground running, setting up her fundraising page, sending out emails to her mailing list and hanging fliers at her husband Jon Hagadone’s beer store, Idaho Pour Authority. She was able to surpass the fundraising mark, gathering over $4,600 the first year. She then raffled the bike off for another $2,300 and donated the proceeds to the school gardens program.

“I love that I can build on the one donation for the next one,” said Reich. “I also like the fact that I can take my bike raffle donation and give it to a specific cause.”

Reich has been involved in the natural food industry for 25 years, so naturally her choice for the recipient involved spreading the message of health. Southside School was able to start a school garden program thanks to Reich’s donations.

“I think kids learning about good nutritious food early on is so important,” she said.

After the first 150-mile ride, as she sat bathing her sore legs in ice, Reich vowed to her husband Jon that she would never do it again.

“Then last year, Jon and I both ended up doing CHAFE together,” she said, “Though we did the 80-mile version.”

The two joined forces in fundraising and broke the $4,000 goal again, winning yet another bike for their efforts.

“We were then able to raffle the bike off for $6,000, which we then donated to Food For Our Children,” she said.

Sandpoint Rotary CHAFE 150 Ride Committee member Mel Dick had nothing but good to say about Reich’s efforts: “It’s awesome what she’s done. What’s really cool is that she takes the bike she won from raising so much, then turns around and raffles it off for another cause. It’s a huge win for the kids in the local school district.”

Reich, who rides 8.5 miles into Sandpoint on a daily basis, laments that she was unable to train as much for this year’s ride: “My life is a little crazy this year, what with taking a new job and all I didn’t have as much  time to train,” she said.

Reich said her and Jon plan to ride the CHAFE 30 this year as a “hiatus” then return to the 150 next year, where she hopes to shatter fundraising efforts yet again, both for Sandpoint Rotary, as well as the charity of her choosing when she raffles off the bike.

“I’m sure I’ll be back next year,” she said. “The fact that kids go hungry in his county makes me really sad, so next year, I’d love to give money to an organization that makes it so Food For Our Children doesn’t have to exist. As the old saying goes, ‘Give someone a fish, they eat for a day. Teach them to fish, they eat their whole life.’ That’s something that inspires me.”