From dream to hard-earned reality

The professional equestrian has never shied from the unknown, whether it was leading horseback expeditions as a teen in Chile or, more recently, in her pilot training. Now local to Sandpoint and still active in the horse world, Haug can add the greatest challenge yet to her “done” list: the Mongol Derby, a 1,000-kilometer (roughly 620-mile) horseback race over the Mongolian steppe that she completed in nine days this past July. 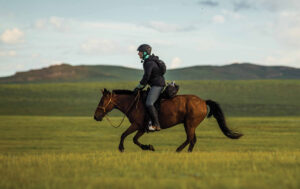 Lena Haug will sit for a Q&A session Nov. 17 after a screening of All the Wild Horses at the Panida Theater. Photo by Shari Thompson.

“I tend to seek things that challenge my abilities and ask me to try my best and keep learning, but … the word that came out of my mouth when I finished [the race] was ‘humbled,’” she told the Reader. “I felt like I was stripped to this raw version of myself and had to fully be OK with everything that was going on.

“My expectations, luckily, were in that mindset already, starting this race, so I felt prepared for the unknown, but it was the embrace of the unknown that I think was the most humbling,” she continued. “Around Day 5 I felt like there was no such thing as ‘good’ or ‘bad,’ there just ‘was,’ and any decision I made was the perfect decision because it had to be.”

Haug will share her derby experience as part of the Pend Oreille Arts Council’s Performing Arts Series at the Panida Theater on Thursday, Nov. 17. The event begins with a pre-show art reception at 5 p.m., and will also feature a showing of the award-winning Mongol Derby documentary All the Wild Horses and a Q-and-A session with Haug afterward.

As for how the experience lined up with her expectations for the derby, Haug said with a laugh: “It was way more hectic and dangerous and insane than I thought it would be.”

Part of that unpredictability had to do with the horses: virtually wild and swapped out by the riders approximately every 25 miles. Beyond the mounts, other variables contributed to the grueling conditions.

“I spent a lot more time being completely out of control and learning to go with the flow than I thought I would have,” she said, adding later, “You have obstacles get in your way that you cannot predict, like wild dogs chasing you, marshes, weather, if the horse stumbles into a vole hole and flips over, if a fox jumps out in front of you — there’s just so many small variables. At one point I ended up in a valley where there were artillery missile firings going on.”

But rather than feeling helpless or afraid, Haug said she felt “a serene bliss that just held me.” Much of that stemmed from the people Haug met along the way. She remembers one local man, helping her swap her horse on around Day 7 or 8, giving her a hug, and the connectedness she felt in that moment.

“I wasn’t sad, I wasn’t unhappy, I wasn’t hurt or anything — but even the simplicity of a hug felt so magical and warming and nurturing at that point,” she said, noting that she cried during the interaction. “I felt so vulnerable and so raw that a hug from a random person was the perfect medicine in that moment.”

Haug said the Mongolian grasslands feel “stopped in time.” The nomadic peoples of the region live in gers — yurt-like structures — where the racers often took refuge and had the opportunity to immerse themselves in the culture.

“You can always walk directly into a ger. You don’t have to knock — you’re always welcome,” Haug said. “You step in with your right foot and you go to the left side, which is open for guests. It’s completely customary to do that — no one ever knocks. The greeting [is], ‘Hello’ or ‘Hold the dog’ as a person coming to a ger, which just means, ‘Please hold your dogs, I’m coming to get food or drink or to stay with you tonight.’ It’s such a cultural 180 from our Western culture, which is very private.”

As part of her partnership with POAC, Haug will also be giving talks about her Mongol Derby experience at local schools. She hopes to present to students about “what it means to have a dream.”

“Everyone has a dream of whatever capacity, and a lot of times they feel really out of reach,” she said. “This one felt incredibly out of reach for me, but taking small steps to get it started suddenly made such a far-away dream my actual reality.”

Tickets to the event are $20 for adults and $10 for students, and can be purchased at artinsandpoint.org/lena-haug or at the door. Those with questions can call the POAC office at 208-263-6139.