A group of about 50 teens and twentysomethings marched across the Long Bridge on June 2 to protest the killing of George Floyd, a 46-year-old black man killed May 25 by a white Minneapolis police officer. Floyd died following more than eight minutes with the officer’s knee pressed to his neck.

Since the killing, which two autopsies have subsequently called a homicide, more than 75 cities around the country have seen a combination of peaceful protests and violence, with some demonstrations spiraling into riots and looting. 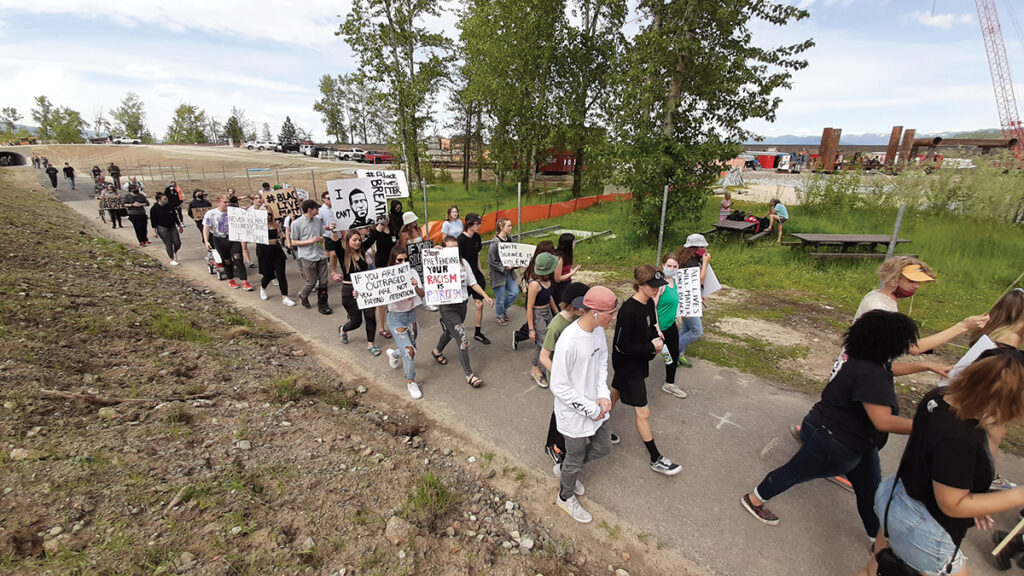 A group of about 50 teens and twentysomethings march toward the Long Bridge at a protest Tuesday, June 2. Photo by Ben Olson.

Chanting “no justice, no peace” and “black lives matter,” the demonstrators in Sandpoint organized as a group of friends and acquaintances, many wearing masks against the ongoing COVID-19 pandemic, and trailing a red flyer wagon loaded with snacks and water. They marched in a calm manner, waving at passersby and snapping pictures.

Behind the demonstration walked about 20 individuals — mostly middle-aged men — armed with various makes of long rifles, carrying ammunition and some with sidearms, as well.

Holding a sign that read “Protecting your 1A with 2A,” local concealed carry instructor and vocal gun rights activist Steve Wasylko said, “That’s why we’re here, to protect their rights safely.”

Groups of armed private citizens have become a feature in many recent protests related to the Floyd killing, as officials ranging from President Donald Trump to Minnesota Gov. Tim Walz to Spokane County Sheriff Ozzie Knezovich have claimed that “outside agitators” are infiltrating or otherwise leveraging peaceful protests into opportunities for violence and property damage.

Following unrest in Spokane over the weekend of May 30, which saw police firing tear gas as an otherwise peaceful protest turned to property damage downtown, Knezovich pointed the finger at out-of-area members of the loosely organized anti-fascist group “Antifa” as the instigators.

Trump has also stated that Antifa is co-opting demonstrations, while Walz claimed that white supremacists and other far-right extremist groups have been using the protests to inflame tensions in his state.

So far, little if any hard evidence has been presented to prove widespread infiltration of demonstrations by any particular “outside” organization or group. Yet, fearing a repeat of the scenes in downtown Spokane, hundreds of armed individuals patrolled the streets of Coeur d’Alene on June 1, claiming to stand as a protective force against would-be infiltrators.

“Coeur d’Alene last night was beautiful,” Wasylko said, going on to refer to worries about “outside people” allegedly coming into the area by the vanload, yet being turned back for fear of being met by armed resistance.

“There have been big reports of outside agitators,” he said.

The mother of one of the Sandpoint demonstrators said she didn’t feel comfortable leaving her daughter alone to participate and marched along with the group. However, she felt better about her Sandpoint High School graduate daughter taking part in a Sandpoint demonstration rather than in L.A., where she attends college.

“Her doing a march here in Sandpoint, I’m OK with that,” she said.

Another parent, who attended the march to keep an eye on his son and daughter, aged 19 and 21, said simply, “I’m scared,” nodding to a nearby Bonner County sheriff’s deputy and the group of armed individuals standing away from the protesters as they staged in the parking lot of the Bonner County Courthouse.

“I’m not going to let them be here without me,” he said.

The march proceeded and ended peacefully, with some of the demonstrators gathering for a photo on the bridge along with a handful of the armed individuals who accompanied them.

“This is clearly just a lot of school kids wanting to have their say and we fully support them in doing that,” Wasylko said.

However, as the march finished and the afternoon turned to evening, dozens more armed individuals filled downtown, patrolling First Avenue as they had in Coeur d’Alene the night before. The resulting feeling of fear and intimidation came out at the Sandpoint City Council Meeting on June 3, as several citizens expressed their distress at being confronted with heavily armed people — many of them from out of the area — when they visited downtown. Concerns ranged from physical safety to potential impacts on downtown merchants who are only now reopening after months of mandated closure due to the ongoing COVID-19 pandemic.

Sandpoint Police Chief Corey Coon addressed the situation during the council meeting, underscoring that “there is no credible threat that we have any of those [extremist] groups headed to Sandpoint. … We have to be diligent to look at those rumors [but] there is nothing credible coming to Sandpoint, nor was there anything credible last night.”

Mayor Shelby Rognstad, too, spoke to the issue at length, telling the Reader before the meeting that, “There’s a difference between what you’re legally entitled to do and what is just responsible behavior as a citizen of your community. … What we witnessed last night was irresponsible behavior.”

He continued: “I believe that some of the vigilantes were there believing that they were there to protect the peace and protect the First Amendment … but the reality is you can have the best intentions in the world and still have a harmful impact and be unaware of it, and that’s exactly what we’re dealing with. … Regardless of whether their intentions were good or not, it was clear that their impact was harmful. That’s the bottom line.”