There can be no avalanche without the failure of a weak layer within the snowpack. In an ideal world, all of our snow would fall at the same rate, the same temperature, and the same density. Unfortunately, Mother Nature provides us with a myriad of scenarios over the course of a winter resulting in a multi-tiered snowpack. The snow we received Monday arrived with little wind and cold temperatures, offering a light and fluffy post-holiday gift to the locals. It was great skiing, but due to the light density, it could be a weak layer as denser snow falls on top of it. The bonds between the crystals potentially won’t be strong enough to withstand the added stress of a heavier slab. That’s the basis of a weak layer. 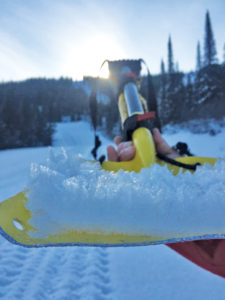 An example of surface hoar. Photo by Tom Eddy.

Persistent Weak Layers are the bane of an avalanche worker’s existence, weak layers that maintain their instability as additional snow buries them. They typically form early in the season when the pack is shallow and more subject to temperature extremes creating a weak layer that can stick around for days, weeks, and even months. This instability is difficult to forecast and that is why we are diligent in tracking weather and changes in the pack throughout the season.

In our intermountain snowpack (we share qualities of both maritime and continental), the typical PWL occurs as either facets that form around a rain crust or buried surface hoar. For background, facets are snow crystals that have gone through metamorphosis driven by large temperature gradients and lost their cohesion to other crystals. Sharp edges prevent facets from bonding and can resemble sugar. Surface hoar is actually the winter version of dew and appears on calm, clear, cold nights. While beautiful to look at, surface hoar develops as feathers that are extremely fragile yet, due to their nature, very persistent.

Now why do we dislike PWLs? Under the right circumstances, they can be buried intact and remain dormant until the right stress is added to the pack. If surface hoar is insulated by light snow, it can stay in a standing position, creating a void that’s ripe for failure; the tell-tale “whoomph” or feeling of a slope settling are signs that you’re dealing with buried surface hoar. Surface hoar is of special concern as it is renowned for propagating over large distances, triggering slides remotely, and causing large avalanches.

On Dec. 13, 2017, a large, 6-centimeter surface hoar layer was buried intact and vertical by a few inches of light density snow. As more snow was added to the pack, we experienced extreme settlement and “whoomphing,” remotely triggered avalanches and easy initiation of slides from ski cutting and explosive mitigation. The problem was wide spread and spatial variability meant that although prevalent, it didn’t affect every area the same. Fast forward to Jan. 25, 2018. During mitigation work before the mountain was open, the surface hoar layer woke up with the placement of an explosive charge in Lakeside Chutes. The ensuing avalanche was over 600 feet wide, ran more than 1200 vertical feet and had a crown depth of 300 centimeters. This avalanche was a great example of the difficulty in predicting PWLs and the havoc that can result. People can tire of recurring warnings of deep slab instability or persistent slabs, but these low-probability, high-consequence events always need to be in the back of your mind.

Tom Eddy is the Snow Safety Supervisor for Schweitzer Ski Patrol and a member of the Friends of the Idaho Panhandle Avalanche Center board.