For the love of new brews

Nothing beats a cold one after a long Monday at work. Lucky for locals, Sandpoint’s bottle shop and taproom Idaho Pour Authority knows this, and is offering a handful of tasters once a month at the store’s blind beer tasting events, held the second Monday of each month at 6 p.m.

“[It’s] something to do on Monday nights, first of all,” said Higgs, who facilitates the tasting events. “Also, [we wanted] to start to build a little community of beer lovers and expand people’s knowledge of beer in general.” 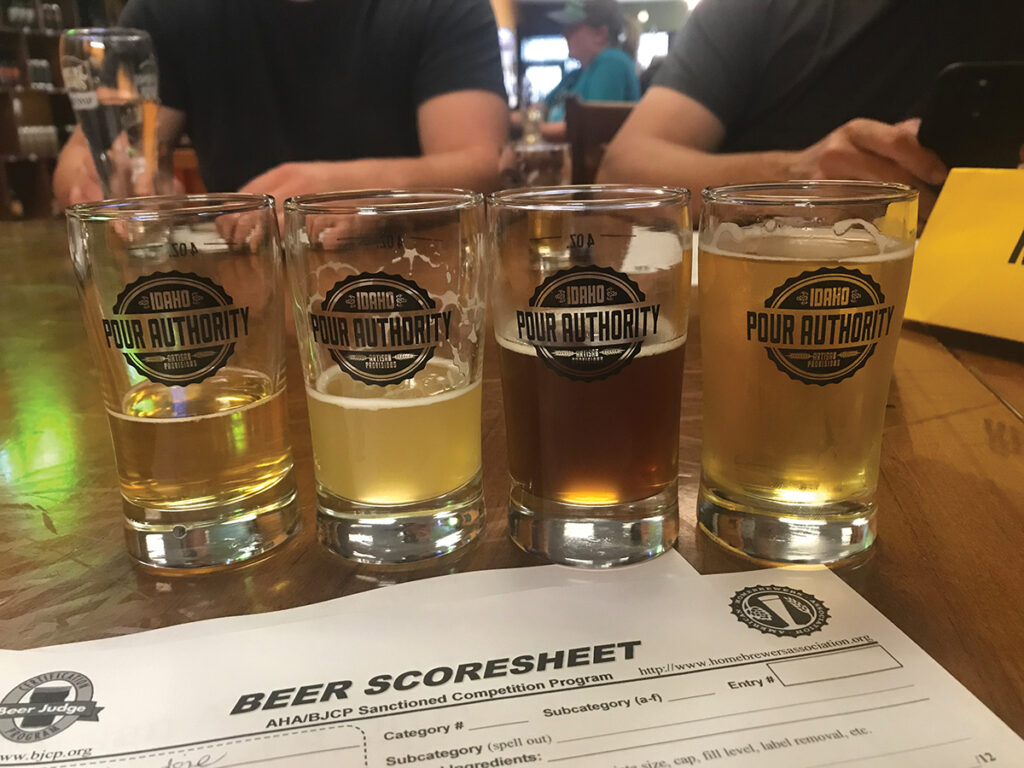 Some frothy offerings at Idaho Pour Authority, with the blind beer tasting scorecard at hand. Photo by Lyndsie Kiebert.

The theme for August’s blind beer tasting event was Belgian ales. Participants, about 12 in all, gathered around the back tables of the establishment and prepared to put their noses and taste buds to the test — myself included.

The procedure was straightforward. We would all sample four-ounce pours of six different beers, then guess — based on a list of beer names — in which order we tasted each. The Belgian beers on display Aug. 9 included pFriem Belgian Style Dark Ale, Du Bocq Blanche de Namur, Huyghe Delirium Tremens, Trappistes Rochefort 10, North Coast Pranqster and Unibroue Maudite. None of us — aside from Higgs — knew in what order they were being presented.

Each participant was offered an official beer scoring sheet on which to keep notes. The sheets featured a sidebar with suggestions for how to most professionally describe scents, flavors and mouth-feels in the world of beer. This was exciting, considering my prior experience with beer tasting included phrases like, “This is hoppy,” and, “This is not hoppy.”

The score sheets, borrowed from the American Homebrewers Association, offered terms like “diacetyl” (tasting like butter or toffee) and “phenolic” (spicy, smoky or tasting like plastic). While I had previously reserved the term “skunky” for the 2-year-old PBRs on my porch, it turns out that light-struck is an actual term in beer tasting, meaning “similar to the aroma of a skunk.” While one participant expressed his disgust that anyone would want to achieve that flavor in a beer, another piped up to say he didn’t mind a little light-struck touch in his beer from time to time.

The conversation remained lively, with Higgs leading the way. He encouraged us to chime in about the scents and flavors we picked up during each round, then offered his own observations (without giving too much away).

I sniffed, sipped and scribbled my way through the hour-long event, spilling only one taster in the process. The other participants at my table were a mix of local friends and friendly visitors to town, all of us eager to correctly guess the order in which we tasted the six Belgian beers.

Though I had my hopes up that beginner’s luck would see me through, I did not guess a single beer correctly. The man to my left claimed the top prize, guessing four correctly and earning a beer glass, along with two cans of a nice Belgian ale to celebrate his hard-earned victory. We applauded him while knowing we were all winners, because we got to sample some nice beers on a Monday night.

Higgs said that the theme for September’s blind beer tasting has not yet been chosen, but he plans to announce it on Idaho Pour Authority’s Instagram, Facebook and website sometime after Monday, Aug. 16.

Overall, the blind beer tasting was a success — elevated enough to occupy the most experienced beer connoisseur, but in a laid-back atmosphere to make a newbie like me feel welcome. Cheers.