Food court is called to order

The Oak Street Food Court is open for the season, with several new faces behind the grills

To be a town known for its food, variety is key. In Sandpoint, a microcosm of that variety can be found at the Oak Street Food Court, just across Oak Street from Farmin Park. 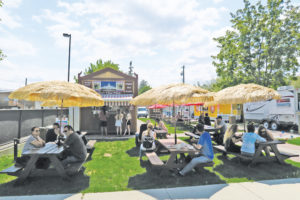 A group of lunchers gather at the Oak St. Food Court on Wednesday in Sandpoint. Photo by Ben Olson.

The food court is open through the second week of October (same as the Farmers’ Market) and is home to several new vendors this year. Though some vendors will be joining the court later this summer, here’s a glance at what’s available now:

Ohn’s specializes in Thai food made to order from fresh ingredients and sold at a fair price. Ohn said she’s been part of the food court since 2014 and said she loves the location.
“I make fast, good, healthy food,” she said. “And it’s made from scratch.”

These guys might specialize in the “best smoked barbeque you’ve ever had,” but they want you to know that’s not all they do. Owner Sandra Shannon said they also do fish and chips, a black bean burger and “a lot more.”
This is Porkey D’s first time in the Oak Street Food Court, and Shannon said she’s excited to get into the swing of things.
“I love being around people, and sharing my food with them,” she said.

The cafe’s name says it all — Improv’s menu is always changing. However, owner Cindy Santi said the general theme at Improv is “healthy, organic, energized food.” This is her first year in the food court.
“I want to create something for everyone,” she said.
Hours: Tues-Sat 10:30 a.m.-5 p.m. (She hopes to begin serving dinner to small groups in June)

La Catrina’s style is simple: “100-percent Mexican.” The owners suggest the tacos as a starting place, but the whole menu is authentic and fresh, from the carnitas to the carne asada. This is their first year in the Oak Street Food Court.