Flappers, not hippies, started it all

Editor’s Note: While the rest of Sandpoint dives into the 1950s this weekend, Reader contributor Tim Henney explores another decade: the Roaring ‘20s. 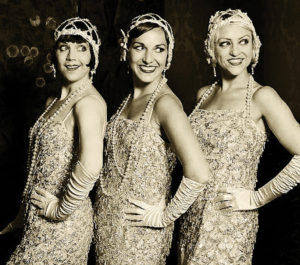 Movies and memoirs say America’s hedonistic, swingin’ culture was spawned in the ‘60s by Dylan, Baez, Janis Joplin and The Beatles. Not so. America’s modern mojo was born in the roaring ‘20s. The decade of whoopdeedo was quelled by the Great Depression, but until it collapsed, the decade was exhilaration on steroids. Prohibition started in 1920. And that did it. Weary from Victorian inhibitions and World War I, and highly pissed about having to sneak their booze, Americans cut loose. The euphoria died, worked its way back in the ‘60s and ‘70s, and remains with us today — but tamped down and in camouflage.

Authors F. Scott Fitzgerald and Sinclair Lewis and artist John Held Jr. portrayed the decade as happy decadence. Dancing, drinking, back-slapping rotary club boosterism, rushing around in raccoon coats from one college football game and frat party to another. It was a heady celebration — providing one was among the connected, the comfortable, the young and anxious. What is often ignored is that violent, hooded rustics of the Ku Klux Klan (among today’s fervent Trump base) lynched blacks with impunity. But segregation was routine not just down in Dixie. Bloody race riots erupted up north. Prohibition brought the Mafia. Deadly union/management battles scarred textile, timber, mining, automobile and other burgeoning industries. President Warren Harding’s infidelities and his buddies’ Teapot Dome Scandal plagued government. With few watchdogs, big business corruption was rampant. Worse, even, than today’s scheming banking, pharmaceutical and tobacco companies, and makers of sugar-laden colas.

In the rural Scopes Monkey Trial celebrity lawyers William Jennings Bryan and Clarence Darrow debated if evolution was fact or fiction. Seeking work, millions moved from farms and cotton fields to urban centers, creating slums. Land developers in Florida fleeced naïve buyers. Police brutality was common – unless the prisoners were wealthy (Harry F. Sinclair, worth over $50 million in 1929 dollars, went to jail for jury tampering, contempt of Congress and other misjudgments that would have put a lessor citizen away for life. Harry turned part of the prison hospital into a Sinclair Oil Company boardroom, dined nightly on filet mignon, and was assigned a dozen prisoner servants. Harry owned a passel of politicians and judges).

Yet many things were clearly better. Maybe just simpler. Neighbors knew neighbors and tended to be there when needed. Traffic jams and road rage were unknown. Citizens weren’t so fearful they felt compelled to carry guns, hidden or otherwise, to the grocery store. People seldom locked their homes or cars. Industry boomed. Communications, science and education bounded ahead. And never in our history has there been such a glittering array of personalities so endearing, so durable, as those who made the roaring ‘20s rip and roar. Here’s just a peek at the people:

For flair and flamboyance no decade has come close. Compared to the rebellious, racially intolerant, rip snortin’ and roaring ‘20s, the years since have been more like a whisper. And that’s probably just as well.