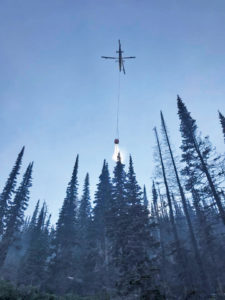 The July 27 lightning storm started 93 fires across the Coeur d’Alene Interagency Dispatch Zone, with 11 growing to be greater than five acres, totaling around 1,500 acres, the U.S. Forest Service reports.

The Cougar Fire, located five miles east of Hope and north of Porcupine Lake, is an estimated 845 acres as of Wednesday evening. The lightning-caused blaze is burning in rugged, thick terrain and has over 100 fire personnel currently implementing fire suppression tactics to reach containment.

“Fire is currently active around entire perimeter in large jackpots of heavy dead and down timber,” InciWeb reports.

Current road and trail closures related to the Cougar Fire include:

The Alpine Fire, located 1.5 miles north of Caribou Lake and 11 miles northwest of Sandpoint, is 103 acres as of Wednesday afternoon and 50 percent contained. Around 160 personnel are working to contain spot fires with aircraft and construct a handline and excavator line.

A road closure is in effect near the Alpine Fire for the portion of the Caribou Road above the Road 2611 junction.

The Smith Creek Fire, located 19 miles west of Bonners Ferry and seven miles northeast of Priest Lake, has grown to 595 acres as of Wednesday.

There are no closures related to the Smith Creek Fire at this time.

Another fire in the Bonners Ferry Ranger District started by the lightning storm but wasn’t discovered until Aug. 2. Known as the Copper Mountain Fire, it’s located on the Canadian border four miles from Eastport, Idaho. There are 110 personnel on the 170-acre fire.

USFS announced Wednesday that forecasted high temperatures and low relative humidities followed by windy conditions are causing firefighters to prepare for increased fire potential. Temperatures in the 90s at 6,000 feet — where local fires are burning — followed by a cold front will likely cause fire to spread, especially in subalpine fir territory.

Stage 1 Fire Restrictions will go into effect at 11:59 p.m. Thursday, Aug. 9. Stage 1 Restrictions outlaw “building, maintaining, attending or using a fire, campfire or stove fire except within a designated recreation site, within a fire structure provided by the administrative agency, or on their own land and only within an owner-provided fire structure,” according to USFS regulations. “Smoking, except within an enclosed vehicle, building or designated recreation site, or while stopped in an area at least three feet in diameter that is barren or cleared of all flammable materials,” is also illegal under Stage 1 Fire Restrictions.

These restrictions affect all public lands in Bonner, Boundary, Kootenai, Shoshone, Benewah and Latah counties, as well as parts of Pend Oreille County, Wash., and Sanders and Lincoln counties in Montana that are administered by the Idaho Panhandle National Forests. For more detail visit www.idahofireinfo.com.