The Cougar Fire, located five miles east of Hope and just north of Porcupine Lake, is an estimated 700 acres as of Monday and continuing to burn in rugged terrain. 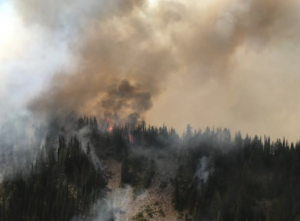 Forest Service officials report that the lightning-caused fire started early in the morning on July 28. Smokejumpers were dispatched but disengaged due to unsafe conditions. As of 6 a.m. on August 5, the Northern Rockies Fire Management Team assumed command of firefighting operations on the Cougar Fire.

USFS reports that current suppression tactics include fuel breaks along the area’s trails and roads, such as the Porcupine ATV trail (trail 642), as well as along Wellington Creek. Dozers and masticators are being used to eliminate brush along these fuel breaks. InciWeb reports 59 fire personnel are currently on the Cougar Fire.

The Porcupine ATV trail is closed as of Monday due to fire suppression efforts. Those accessing the Lightning Creek area in the coming days are advised to travel slowly, keeping increased fire-related traffic in mind.

With hotter temperatures predicted for the next few days, fire activity can be expected to increase. 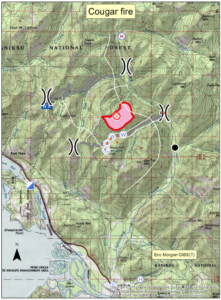