The Bonner County Board of Commissioners voted unanimously Tuesday to approve a new firearm use and training policy for the county’s Justice Services department.

“Those officers would have been less likely to survive those incidents if they couldn’t have fired back,” Stultz said.

He said more than 50 percent of the people on misdemeanor parole in Bonner County are either previous felons or their cases started out in district court as a felony and, due to plea deals, were dropped down to misdemeanors. 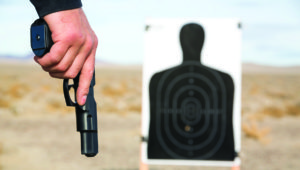 “A lot of times we hear from people, ‘Well, you’re just dealing with misdemeanors.’ That’s not really the case. We’re dealing with some pretty nasty folks — violent cases, drug cases, sex offenses that have been pled down, ” Stultz said. “I want my officers to have that tool in their toolbox if they need to defend themselves while out in the field.”