Fifteen years ago and still reeling

Fifteen years ago on Sept. 11, America was yanked into the real world.

Korea; Vietnam; four Kent State University, Ohio, students  killed by National Guardsmen; exploding cities; unpunished murders of blacks in the Deep South during the Civil Rights wars; assassinations and attempted assassinations of Presidents, presidential candidates and civil rights leaders; the grisly Manson murders in Los Angeles; Serial killer Jeffrey Dahmer, who killed and dismembered 17 men and boys and cannibalized some of them. And on and on. Shockers. 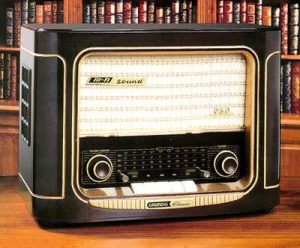 But only the Sunday morning surprise attack on Pearl Harbor, Dec. 7, 1941, was as sudden, as shattering, as incomprehensible, as the Sept. 11, 2001, assault in downtown New York City.

The World Trade Center attack—not its aftermath, but the attack itself—was in ways worse than Pearl Harbor. Not just in that more people died in the WTC attack. But because on Dec. 8, 1941, FDR declared war against Japan (Germany and Italy declared war on America on Dec. 11, and we immediately returned the favor). Americans had a pretty good idea of what those declarations meant.

At Pearl Harbor sailors and civilians had clearly identified the low-flying Mitsubishi AGM3 Zero Japanese fighters whose bombs, cannons and machine guns were attacking everyone and everything on the ground. Sixty years later, when two Boeing 767 passenger planes loaded with people and jet fuel slammed into the twin towers, no one knew who, what or why.

The Grundig Classic model radio pictured here, complete with “Hi-Fi  Sound,” was the second piece of furniture my new bride, Jacquelynn, and I bought for our cozy Greenwich Village, NYC apartment in August, 1957. Our first purchase had been a mattress. I bought the radio at a store named Heinz & Bolet, on Dye Street about a block from the AT & T and Western Electric headquarters building at 195 Broadway, where I worked. Unfortunately for Heinz & Bolet, it was smack in the center of the 16 acres of old New York needed by the city to construct an enormous financial complex to be called the World Trade Center.

When the restaurants, bars, haberdashers, apartments, barbershops, appliance and electronics stores, dentists, doctors, lawyers, coffee shops, insurance and investment brokers, shoe stores, plumbers, opticians and warehouses were being uprooted, mashed into detritus and hauled away in the mid-1960s, I watched.

My windowed office was on the 14th floor of the New York Telephone Company building, part of AT & T, and directly across the street bordering the planned WTC site. When I wasn’t writing speeches for lanky Yalie sailor Clifton Phalen, company president, I gazed down upon the removal of Heinz & Bolet and its neighbors.

In the early 70s, after a brief corporate stint in Beverly Hills, I was back in downtown New York, at AT & T headquarters, editing the Bell Telephone Magazine. The World Trade Center’s seven buildings comprised the largest civilian project ever tackled by AT & T and its subsidiaries, at that time the world’s biggest business. The Bell Telephone Magazine, the company’s flagship publication, covered the construction of the twin towers, the world’s tallest skyscrapers, from day one to their topping off in late 1972.

An interesting aside, at least to history buffs, is that the beautiful Woolworth Building, one of NYC’s first skyscrapers, is just two blocks up Broadway, a five minute hike from the World Trade Center site. From 1913 to 1930 the Woolworth Building was itself the world’s tallest building. More resembling a pintsized Empire State Building than skinny, upended shoeboxes, it was  considerably less conspicuous than the twin towers. The killer pilots ignored it, although it suffered collateral damage from the WTC assault. Both the World Trade Center and the Woolworth building were corporate social centers in their day for those of us who labored in their shared neighborhood. Miller’s ground floor restaurant in the Woolworth Building was a noted downtown watering hole for many years. It’s where I discovered the availability of single malt scotch in 1970 (later I reverted back to Johnnie Walker Black, having decided it tasted better and cost less than most single malts).

The Woolworth’s imposing new neighbor, the WTC,  was an embarrassment of riches for those downtown worker bees seeking noontime or after-hours sustenance. Windows On The World was a premier eatery 105 stories in the sky. I ate many a meal there. Always on company business. And the seven-story twin towers basement, into which the buildings collapsed on 9/11/01, was brimming with bars, cafes and exotic shops. The basement also contained a Broadway ticket agency, back when normal people could afford to attend Broadway musicals, and did. Today it helps to be Bill or Melinda Gates.

We saw a lot of Broadway hits in NYC back in the day. Now my 1957 bride and I go to the Panida. Or, even easier, we switch on the Grundig Hi-Fi radio bought at Heinz & Bolet back when the original World Trade Center was but a gleam in a developer’s  eye.

Tim Henney retired in 1986 as corporate public relations director of “the old” AT & T in New York City when it was parent company of the erstwhile Bell Telephone System. He claims he never did understand how the telephone worked.