Fiddlin’ Red is many things. 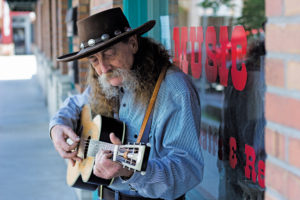 Fiddlin’ Red outside his shop on Church Street. Photo by Kiersten Patterson.

But above all, Fiddlin’ Red — or Greg “Fiddlin’ Red” Simpson, if you want to be really proper — is a man who woke up one recent day and realized he’s been teaching music for 50 years “and still loving it.”

“All students are unique individuals. They all learn differently,” he said. “I love the kids, but I teach adults, too. It always raises people’s self-esteem when they learn an instrument. They become proud, they feel accomplished. Plus, music is good for the soul.”

Fiddlin’ Red’s Music, located at 111 Church St., is a one-stop shop for renting or buying acoustic and band instruments, as well as the place to get instruments repaired. Red also offers lessons in old-time fiddle, banjo, mandolin, guitar and occasionally ukulele.

After working in music shops his whole life — and even building guitars at Dobro and Rickenbacker — Red’s boss of 25 years at House of Music in Colville, Wash., prompted his last move by telling him Sandpoint needed an instrument repairman. He’d heard Sandpointians were traveling to Coeur d’Alene and Spokane to have instruments fixed.

After two years at Sandpoint Music, Red became his own boss when he opened Fiddlin’ Red’s nearly six years ago. He said the shop keeps him busy as the owner and only employee.

“I love being my own boss. I get to set the ambiance that I choose,” he said, pointing out the western theme of his shop. “I credit the store’s survival to being able to cover so many bases.”

Red said he tried a number of instruments as a child, from trumpet to piano, but nothing felt quite right. At 13 he heard someone finger picking a guitar for the first time and thought, “That’s for me.” From there, without a formal teacher, he learned everything by ear. To this day, Red does not use classically written music, but instead teaches a system of finger and number cues used mostly for old-time music.

“I’d go to pawn shops and buy old records and listen to them over and over and over until I figured it out by ear,” he said, noting he grew up in Fullerton, Calif. “So while all my friends (were) out surfing, I’m a red head, burned up at the beach, so I stayed home and played the guitar.”

His newfound hobby stuck, and Red said he took it “very seriously.” In 1968, 16-year-old Red began teaching banjo, mandolin and fiddle at a music shop in Buena Park, Calif. By 17 he’d scored a gig at a pub on Newport Beach. At 20, he and his band — Fiddlin’ Red Simpson and the Old Scratch Band — put out a record that’s currently being bootlegged on Amazon.

“It’s sort of an offhanded compliment,” Red said with a laugh.

It’s been a life of music for Fiddlin’ Red, with a special emphasis on sharing his passion through teaching. When it comes to teaching music, Red said the greatest key is patience.

“I’m very patient, so a lot of parents like me because they see how patient I am with their kids,” Red said. “Some kids are easily intimidated and they need an instructor that’s friendly and kindly.”

Brecon Bennett, a 14-year-old Sandpoint fiddler, can vouch for that patience. She said she started lessons with Red about seven years ago and continued for two years.

“He is very sweet. It’s hard to find someone as patient as Red,” she said. “He takes the time to help you learn. He was an amazing teacher.”

Thanks to the love for music that Red helped foster, Bennett is now making a difference in the community through her non-profit Musical For Life. She said she saw students quit music lessons due to financial struggles and felt compelled to help them.

“It wasn’t because they didn’t want to (continue lessons), it was because they were having financial difficulties,” she said. “It led me to think, ‘Why are these students, who have a desire to learn music, (quitting) because of something they can’t really help?’”

Musical For Life, which began just a year ago, finds funding for these students through grants and donations. Bennett said the beginning stages have been slow but successful.

When Red talks about Bennett’s non-profit and recalls teaching her fiddle, a hint of pride can be heard in his voice. It’s the voice of a teacher.

“She started with me, and this is where she’s gone with it,” he said.