Local author honored as ‘Writer of the Year’

Capt. Bill Collier has sold more than 6,000 copies of his books on flying in Viet Nam and Laos

To know Captain Bill Collier is to read his words. The author of two nonfiction books highlighting his experiences as a combat helicopter pilot in Vietnam and later flying helicopters in Laos for Air America, Collier gives readers complete access to many of his adventures (and misadventures) in the air. 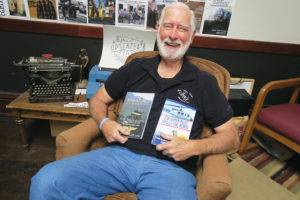 A retired USMC Captain, Collier’s military service in Vietnam was highlighted in his first novel, “The Adventures of a Helicopter Pilot: Flying the H-34 Helicopter in Vietnam for the United States Marine Corps.”

He followed this first military memoir with his next book a year later, “CIA Super Pilot Spills the Beans: Flying Helicopters in Laos for Air America.”

Because of his prolific work and ability to market himself like a guru, Collier was recently named “Writer of the Year” by the Idaho Writer’s League at their annual conference in Moscow.

The Idaho Writer’s League is a critique group of writers with six chapters throughout the state, and a seventh forming in Twin Falls. The main purpose of the league is to help writers improve their craft.

“We talk about writing and support each other with positive critiques,” Collier said. “There are no negative, angry comments, just constructive criticism aimed at making us better.”

The Sandpoint chapter of the Idaho Writer’s League has over 30 members and has been around for 77 years. The group meets twice a month on the first and third Saturdays at 9 a.m. at the Sandpoint Library. Their next meeting is Saturday, Oct. 6 at 9 a.m.

“We always have room for more,” Collier said. “We get everyone from little old ladies reading poetry to me, doing my military memoirs.”

Each year, the League holds a conference, with each chapter taking turns hosting.

“We’ll have general meetings, breakout sessions for experienced and successful authors to speak about everything involving writing – how to get published, how to develop character, how to market yourself.”

There are also annual contests awarding cash prizes in 39 different genres. Two years ago, Collier was awarded first place in the book/nonfiction category for his second book. He also got first place last year for a short humor piece and several lesser awards.

“I was nominated for Writer of the Year, and darned if I wasn’t awarded it,” Collier said.

In an age when writers seldom receive the recognition for their work, Collier said the honor was “pretty darn exciting. I’m honored and excited and proud. And happy. What can I say?” he said.

While Collier has a knack for sharing military experiences that relate to everyone from the staunchest veteran to those just seeking a good story, he also excels at marketing his work.

Collier said he is currently halfway done with the rough draft of his third book, which is about the rest of his career as a helicopter pilot after Vietnam and Laos.

“I flew four summers in Alaska, which includes underground atomic testing in the Alleutians. I spent two years in the South Pacific in the Kwajalein Atoll, a few months in Saudi Arabia, all over California.”

Collier will speak with budding authors at a Writer’s Workshop event at the Sandpoint Library tonight: Thursday, Oct. 4, from 5:30-7 p.m.

Asked to share a few tips for authors to market their work, Collier said, “I always wear my Vietnam vets hat. It’s common for people to say, ‘Thank you for your service,’ nowadays, and I have bookmarks made for my books. When they talk with me, I’ll say, ‘By the way, I wrote a book about my experiences,’ and hand them a bookmark. I know I get sales from that. Also, I never pass a bulletin board without putting bookmarks out.”

Collier said in these days of do-it-yourself publishing, authors are expected to market themselves, since no one else is going to do it for you.

“You can’t just put a book down on the table and expect it to sell itself,” Collier said. “They don’t do that.”

Collier’s advice for anyone wanting to tell their story but not sure how to begin?

“Everything you write is manure,” he said. “But manure is good fertilizer. Just spew it out, let it age, and go back to it. Change it. But first get it down on paper. Don’t worry about punctuation, spelling, grammar. Just get it out and add to it later.”

Captain Bill’s book are available at the Corner Book Store, Vanderfords and other locations around town.