Starting this week, relive one of the greatest musical journeys of the ‘70s and ‘80s when “Bohemian Rhapsody” hits the Panida Theater. 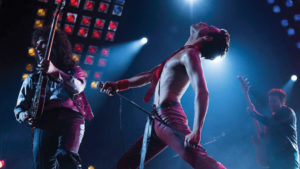 A biopic covering the legendary rock band Queen and its charismatic frontman, Freddie Mercury, the movie follows the band from obscurity to pop-culture immortality. Along the way, the band endures turmoil among its members and a devastating AIDS diagnosis. It’s a dramatic undercurrent for a visually spectacular and infectious retelling of Queen’s greatest hits and shows, culminating in the band’s legendary 1985 Live Aid performance.

The film overcame a hellish production to mint its box-office gold. Originally, “Bohemian Rhapsody” was set to star Sacha Baron Cohen as Mercury, but the comedian left the production over creative differences with its producers. Then, as the movie advanced from pre-production to filming, director Bryan Singer was eventually fired and replaced by Dexter Fletcher after a string of unannounced absences from the set. Singer now faces allegations of sexual misconduct and is yet another high-powered Hollywood mogul under scrutiny following the arrest and prosecution of producer Harvey Weinstein.

Whether they praised or panned the movie, most critics found a star in lead actor Rami Malek, who portrays Mercury at both the highest and lowest points of his life. Capturing both the humanity and magnetic star power of a pop culture icon is no small feat, but Malek proved more than up to the task. According to a Rolling Stone account of the production, the 37-year-old actor underwent an exhaustive training program to become the rock star, undergoing coaching to replicate his movement, accent, singing and piano playing. That level of commitment is no surprise to audience members who follow Malek in the critically-acclaimed show “Mr. Robot,” in which the actor delivers an award-winning performance as the brilliant but troubled cybersecurity engineer and hacker Elliot Alderson.