How fast does a snowflake fall?

How fast do snowflakes fall? Do they come down at 50 miles per hour? Or 20? Or perhaps as slow as 10 mph? Could a person run faster than a snowflake falls?

This question came into my head last December as I looked out at an early season snowstorm from my study window. It seemed that the flakes were fluttering down quite slowly, almost in slow motion. But this was a subjective impression, and could even be an optical illusion. The question really needed to be answered in a scientific way. I sighed wistfully. It would probably take a million-dollar NSF grant to assemble all the fancy electronics needed to measure snowflakes in flight, right? 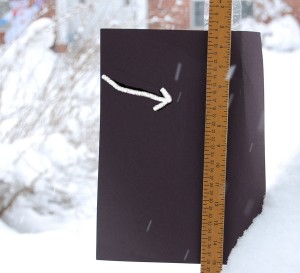 But I could not put the question out of my mind. Over the ensuing weeks, every time I saw another snowflake—and, as you recall, there were many to see!—I kept wondering about it: How fast were they going? Then, rather by accident, I bumped into a method of approaching an answer to my question.

I had taken some pictures outdoors, and looking at the shots later, I noticed some blurry white streaks. These, of course, were snowflakes, moving too fast to be frozen at the slow shutter speed I was using on that dim day. It occurred to me that these streaks did give a clue about the speed of the snowflakes that made them.

To put this idea into practice, I taped a square of black paper to a yardstick and propped it on a snow bank. When the flakes started coming down, I ran out with my camera and took lots of pictures of the black square.

Sure enough, when I downloaded the pictures to my computer, white streaks of snowflakes showed up against the black background (see photo). It was a simple matter, using dividers, to gap the length of a streak on the screen, and then to transfer that gap to the yardstick to establish how long the streak was.

For example, in the photo, the streak identified with the arrow is 0.4575 inches long, as measured against the yardstick in the picture. Since the shutter speed was 1/80th of a second, this means the snowflake moved 0.4574 inches in 1/80th of a second. With a little bit of arithmetic we can calculate that this snowflake was moving at a speed of 36.6 inches a second, or 2.08 miles per hour.

Of course, there are imperfections in this method. For one thing, it assumes that the snowflake is falling close to the paper target. If it is away from the paper—and closer to the camera—then this method will produce an exaggerated estimate of its true speed. For example, the broader, fuzzy streak above the arrow in the photo is probably a flake closer to the camera (and hence out of focus). So its greater length does not, in fact, reflect a greater speed.

Another thing to watch out for is wind. Obviously, wind can blow flakes around, and we don’t want to count the wind speed in our estimates. I’ve used the assumption that if the flake is moving straight down, or nearly so (as in the photo), then there is very little wind effect. Flakes moving in a more sideways direction are assumed to be influenced by the wind and are disregarded.

Over a period of several days, I took many pictures of the target when snowflakes were falling, at different shutter speeds, including 1/30th, 1/40th and 1/80th of a second. In all, I obtained 54 useable measurements of snowflake streaks. The calculated speed of these flakes ranged from 1.1 mph to 2.6 mph. This seems a rather wide range, but it is plausible that flakes of different sizes and different densities could fall at quite different speeds. The median speed of these 54 different flakes was 2.0 miles per hour, and I suggest we take that as the official answer if we are ever find ourselves on a quiz show and are asked, How fast do snowflakes fall?

Can you outrun a snowflake? Obviously yes. In fact, you can out-walk them, unless you’re really dilly-dallying. A typical walking speed on flat pavement is around 3.0 miles per hour, so you can make it to City Beach and back before that flake that started in a mile-high cloud hits the ground.