Odds are that most people remember Daniel Defoe — if they remember him at all — as the author of Robinson Crusoe. That, or they confuse him with the actor Willem Defoe (no relation and they were born 295 years apart). The former Defoe, however, deserves to be ranked among the most important English language writers of the past three centuries, and not necessarily for his novels. 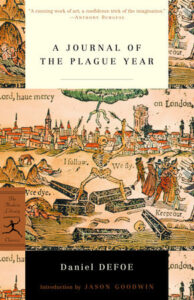 In addition to Robinson Crusoe, Moll Flanders and others — a body of work for which Defoe is often labeled by historians as “the first novelist” — he was also publisher/lead writer of a newspaper in London that became the template for all others to follow, earning him another moniker as “the first journalist”; and he turned his hand several times to writing history. Albeit, his version of “history” blended factual research with imagination and presented it as reportage.

This amalgam of fact and invention might be better understood today as “historical fiction,” but back in the early eighteenth century, no such genre markers yet existed. To Defoe and his contemporaries — even readers into the late-1800s — the truth of his “histories” transcended their facts.

Among Defoe’s most enduring historical works is A Journal of the Plague Year, which he published in 1731. The book purported to represent a memoir of the 1665-1666 bubonic plague outbreak “written by a citizen who continued all the while in London.”

While Defoe had lived through “The Great Plague of London,” which killed 75,000 people, he was only about 5 years old at the time. Rather, he relied on primary source research and his flair for vivid, direct prose to recreate the chaos and despair, opportunism and denial that gripped the city even as “the visitation” was still silently working its way through the grubby East End districts.

From the first pages, the reader is struck by the familiar modern tone, as Defoe opens by ruminating on the power of information — how in the absence of reliable media, rumor manipulated the reaction to news of a sickness that appeared only to affect a pair of men “said to be Frenchmen.” A foreign disease affecting only foreigners, in other words. The family with which the “Frenchmen” were staying tried to hide the infection, but “it had gotten some vent in the discourse of the neighborhood” and, as with a Facebook post, went “viral.”

Among the many innovations in Defoe’s plague work is his device of breaking from the narrative to give official-looking infection and mortality reports — a practice of reportage that we are all too familiar with amid COVID-19.

Seeing these reports, Londoners experienced another wave of anxiety but soon relaxed:

“And then we were easy again for about six weeks, when none having died with any marks of infection, it was said the distemper was gone.”

Of course it wasn’t gone; it was simply worming its way from house to house, slowly building nodes of infection. Still, Londoners practiced some self-isolation and social distancing, avoiding the streets where plague had been identified “unless they had extraordinary business that obliged them.”

Over the course of the following months, Defoe’s “citizen” — a well-to-do saddler trading with the American colonies — recorded the ebb and flow of public concern over the disease. Hope and fear waxed and waned as the weather changed and people ventured from their homes — some simply to go about their business, while others, especially the wealthy, “thronged” out of town seeking refuge in the country.

Then the burial notices started to pile up and, seeing the rich in flight, people started to worry about government orders confining them to shelter in place and road closures “to prevent people from travelling, and that the towns on the road would not suffer people from London to pass for fear of bringing infection along with them.”

The narrator, of course, opts to shelter in place to protect his business.

It is clear to Defoe that if people had at first taken the plague seriously it would not have conquered the city over the course of the year. He writes as much, criticizing those who considered themselves “indifferently healthy” and lambasting the “wicked generation of pretenders” who cropped up to alternatively deny the plague, offer bogus cures, and attempt to make fast money on supplies and other comfort items.

As Defoe’s saddler put it, “I often reflected upon the unprovided condition that the whole body of the people were in at the first coming of this calamity upon them, and how it was for want of timely entering into measures and managements, as well public as private, that all the confusions that followed were brought upon us, and that such a prodigious number of people sank in that disaster, which, if proper steps had been taken, might, Providence concurring, have been avoided, and which, if posterity think fit, they may take a caution and warning from.”

For a piece of objective history, Defoe’s work is iffy. As for posterity, it clearly holds its “caution and warning” well on its way to a third century in print.