Enforcement ramps up on dogs in breweries, coffee shops

Sandpoint loves its dog-friendly businesses, but more rigorous enforcement of Idaho law may exclude eating and drinking establishments from that category. 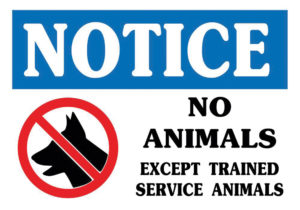 Up until recently, businesses like MickDuff’s Beer Hall and Evans Brothers Coffee that serve drinks but not food have allowed dogs indoors and outdoors without issue. But with new businesses finding that similar options aren’t available to them, Panhandle Health District is cautioning local establishments that dogs on the premises of any food-and-drink outlet is out of compliance with state law.

“The dog issue has been frustrating for many local establishments, and I understand it; but, the role of a licensed facility is to comply with the Food Code, and our job is to inspect you all in relation to the Code,” wrote PHD Program Manager Kathryn Kolberg in a letter to MickDuff’s. “If we see dogs in an establishment, we are required to issue a violation. If we get complaints about the issue, we will be following up on them.”

Idaho’s enforcement of laws concerning animals at food establishments has been inconsistent at best. It was generally accepted that restaurants serving food were obligated to prohibit pets with the exception of service animals. However, breweries and coffee shops that don’t serve food often allowed dogs as long as processing areas — brewing and coffee-roasting rooms, for example — were separated from seating areas. After state and health officials began receiving complaints, officials began more consistent enforcement. And that includes not only dogs indoors, but also outside or anywhere else on the premises.

It’s a move that has received some push-back, particularly from businesses that consider dog-friendliness to be a big part of their appeal. As a result, the statewide brewing guild Idaho Brewers United is checking in with its members about their opinions on dogs in breweries. It’s possible that if widespread support exists for the effort, the organization could advocate for a “Pooches on Porches” bill permitting dogs in outdoor areas.

“Breweries with no food operations have been told absolutely no dogs, no matter what (exception: service dogs!) while less than a mile away, another brewery has been told nothing when dogs have been present during a health department visit,” the brewing guild explained in a newsletter. “There is an effort to legalize dogs on patios, and it will affect breweries.”

Note: This story was updated with a clarification on Idaho Brewers United’s plans for potential Pooches on Porches legislation.