President Trump sinks to a new low in Helsinki

Editor’s Note: This is an opinion article written by Reader publisher Ben Olson.

When President Donald Trump stood next to Russian President Putin in Helsinki on Monday, he had a chance to prove to his critics that he believed in our country’s best and brightest, that he stood behind the conclusion of every single one of our intelligence agencies, which was that Russia had definitively meddled in our 2016 election. 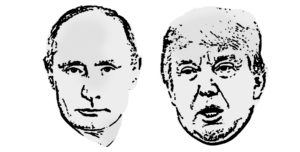 What could have been a shining moment of strength turned into a disgrace, as Trump prostrated himself before the world by declaring that he took Russia’s word over his own intelligence agencies.

When asked by a reporter if he held Russia responsible for anything related to election meddling, Trump said, “I hold both countries responsible. I think the United States has been foolish.”

Pressed by another reporter, Trump said, “My people came to me, Dan Coats, some others, they came to me and said they think it’s Russia. I have President Putin. He just said it’s not Russia. I will say this, I don’t see any reason why it would be.”

These incredible statements came just three days after 12 Russian military intelligence agents under direct Kremlin control were indicted for meddling in the 2016 election.

“President Trump must clarify his statements in Helsinki on our intelligence system and Putin,” Newt Gingrich tweeted Monday. “It is the most serious mistake of his presidency and must be corrected – immediately.”

Sen. John McCain tweeted, “Today’s press conference in Helsinki was one of the most disgraceful performances by an American president in memory. The damage inflicted by President Trump’s naiveté, egotism, false equivalence, and sympathy for autocrats is difficult to calculate.”

Idaho’s Sen. Jim Risch released a statement: “My assessment has not changed; Russia attempted to interfere in the 2016 U.S. election and is no friend of the United States. The United States must stand from a position of strength in our relationship with Russia and in defense of our allies and shared values.”

“I have always believed that America first does not mean American alone,” U.S. Rep. Mike Simpson, R-Idaho, wrote in a statement Tuesday. “We are at our strongest when we work together with our allies to counter international aggression inconsistent with our values. In response to Russian actions that run counter to our principles, Congress has spoken clearly by providing the Administration tools to hold the Kremlin accountable, tools that I hope will be utilized to their fullest extent.”

Over 28 hours later, facing such immense backlash, President Trump attempted to walk back his comments, saying he “misspoke.”

“I came back and said, ‘What is going on? What’s the big deal?” Trump said. “I got a transcript, I actually went out and reviewed a clip of an answer I gave and I realize there is a need for some clarification.”

Trump went on to say, “I accept our intelligence community’s conclusion that Russia’s meddling in the 2016 election took place. Could be other people also. There’s a lot of people out there.”

The key part of this statement is the “Could be other people also,” when he negates his backtracking by again sticking to the idea that others could have been at work in the election meddling.

They haven’t. U.S. intelligence agencies are very clear about that.

“In a key sentence in my remarks I said the word ‘would’ instead of ‘wouldn’t,’” Trump said. “The sentence should have been: ‘I don’t see any reason why it wouldn’t be Russia. Sort of a double negative. So, you can put that in and I think that probably clarifies things pretty good by itself.”

This excuse, in a word, is weak. If Trump did, indeed, misspeak, he had 28 hours of backlash during that time to correct the record. He gave two interviews with Fox News, tweeted nine times and his administration even released talking points defending his performance at the summit. Not once did anyone say he misspoke.

Attacking the credibility of his own intelligence agencies is a common refrain from the president. He has repeatedly cast doubts over Russia’s role in election meddling, saying that “maybe there was no hacking,” and, “It could have also been somebody sitting on their bed that weighs 400 pounds.” Even when begrudgingly admitting he believes his intelligence agencies, he usually qualifies his statement with a counter statement that raises the question that it might be another country that meddled.

Trump’s own director of National Intelligence, Dan Coats, released a statement Monday that served as a strong rebuke to the President: “The role of the Intelligence Community is to provide the best information and fact-based assessments possible for the President and policymakers. We have been clear in our assessments of Russian meddling in the 2016 election and their ongoing, pervasive efforts to undermine our democracy, and we will continue to provide unvarnished and objective intelligence in support of our national security.”

The real question is this: What Faustian bargain has Trump made with Putin behind closed doors, when it was just the two of them and their translators?

When asked if he held Russia accountable for anything, Trump said, “I think we’re all to blame,” somehow throwing the U.S. into the same trench as Russia. It is this statement that is perhaps the most alarming.

America isn’t to blame for the downing of passenger jet MH17, Russia is.

America isn’t to blame for the annexation of Georgia and Crimea, Russia is.

America isn’t to blame for chemical attacks in Syria, Russia is.

America isn’t responsible for the poisoning of two British agents, Russia is.

To stand side by side with an autocrat like Vladimir Putin and say America is equally to “blame” for the atrocities that Russia has committed, and continues to commit, is a slap in the face of every American. At least it should be, but I fear the Trump supporters will again find no reason to waver in their devotion to the rising American despot.

Former CIA director John Brennan tweeted perhaps the most damning statement that puts the ball in the Republican party’s court.

“Donald Trump’s press conference performance in Helsinki rises to & exceeds the threshold of ‘high crimes & misdemeanors.’ It was nothing short of treasonous. Not only were Trump’s comments imbecilic, he is wholly in the pocket of Putin. Republican Patriots: Where are you???”