Work continues apace on street and pedestrian right-of-way construction in the downtown core. Nearly a month after crews broke ground on the project — Phase 2 of the effort to rebuild downtown Sandpoint’s surface infrastructure — the asphalt from Second Avenue and Cedar Street to First Avenue and Church Street has been removed, trees and street furniture taken out, and workers are installing pipes and utilities. 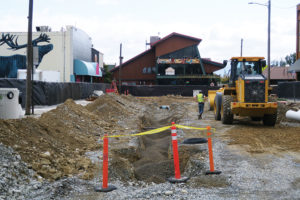 A crew member exits a construction vehicle on Cedar Street on Sept. 24. Photo by Ben Olson.

“We’re on schedule at this point,” said Sandpoint City Administrator Jennifer Stapleton. “We’ve had that caution from the beginning that weather may have an effect on this, and our forecast is now predicting potentially snow up in our area, but at this point the project is on schedule.”

The entire project area remains closed to motorists but open to pedestrians, who must navigate downtown through tunnels of fencing with a designated crossing area at First and Main. Crews in the week of Sept. 21-27 adjusted the fencing on Main to end at the alley, opening the way for pedestrians to move north-south between Main and Cedar.

According to an update from the city, the varieties of tree species that will be planted along Cedar include imperial honeylocust, chanticleer pear, green vase zelkova and Chinese dogwood.

Officials also noted that businesses are welcome to decorate the downtown pedestrian fencing with lights, so long as they do not present either overhead or tripping hazards.

“We appreciate the cooperation with the businesses and understanding,” Stapleton said. “This agreed-upon approach with revised timeline and a really aggressive construction plan, I think, is something that is working out the best that it could be for the city and the businesses downtown.”

Stapleton added that she visited about 20 downtown businesses on Sept. 20, describing most merchants as grinning and bearing it while their street frontage is dominated by construction work.

“We’re definitely not hearing the impacts that we were hearing from businesses during the first phase [of construction last year] on Cedar Street,” she said, crediting the collaborative approach between the contractor, city and business owners in addressing concerns over noise, dust, access and general disruption stemming from the project.

“It’s been really a city-owned project in partnership with the adjacent property owners and businesses, and it really allowed us to sit down, hear the feedback and really look at putting out our bid and outlining a process that worked best for our businesses downtown,” she said.

Based on the accelerated construction timeline, which the contractor has indicated to city officials it intends to pursue, crews will begin working on curbs and concrete crosswalks at Main Street beginning Monday, Oct. 7. If all continues as it has, Stapleton said the project is on track to meet the incentivized completion date of Nov. 26.

“I think when we’re going to reach that point when it gets tough is when it comes to demo-ing the sidewalks and doing that,” she said. “The project flip-flops when it comes to that — the pedestrian corridor then becomes the middle of the streets.”

For more information and to follow progress on downtown construction, visit sandpointstreets.com, facebook.com/cityofsandpoint and check back in the Reader as work continues.