Train pulling out of the station on second rail bridge

Since Burlington Northern-Santa Fe announced plans in the spring of 2017 to begin pursuing permits for building a second rail bridge to span Sand Creek and Lake Pend Oreille, community members have been vocally divided on the project. 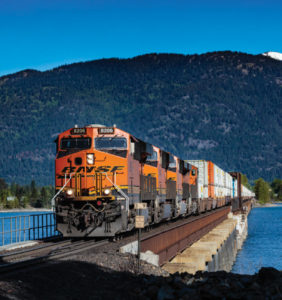 The U.S. Coast Guard released its Environmental Assessment of the project — known officially as the Sandpoint Junction Connector Project — and accompanying “Finding of No Significant Impact” on Sept. 5, which marked the clearance of a major hurdle for BNSF.

With all permits in hand, aside from the U.S. Army Corps of Engineers Clean Water Act Section 404 permit, BNSF spokesperson Courtney Wallace said the company will soon begin “upland work,” entailing “roadway work for site access located off the highway, temporary and permanent trail construction to ensure that the multi-use path can be used throughout construction, [and] clearing areas for new trail construction and bridge approaches.”

In the wake of the Sept. 5 decision by the Coast Guard, which is the lead permitting agency for structures over navigable waters, debate over the project has centered on why the Coast Guard did not require BNSF to pursue an Environmental Impact Statement — considered more thorough than an EA.

According to Sandpoint-based Idaho Conservation League Associate Matt Nykiel, more than 2,000 respondents — “the vast majority of comments submitted on this project” — requested BNSF perform an EIS. Despite that, Coast Guard officials stuck hard to National Environmental Policy Act guidelines, which require only an EA in this case.

Wallace pointed out that the EA released earlier this month “is 1,526 pages long, including all the appendices.”

“The Coast Guard made a carefully considered and measured decision,” Wallace said, “and BNSF believes it was the right decision based on more than a year of process and studies.”

Speaking before the Sandpoint City Council on Sept. 18, Nykiel requested council members submit a formal letter asking the Coast Guard to reconsider its finding and press BNSF for an EIS. At the time, he said this would be “the last opportunity for the city to weigh in.” Since then, he learned from the Coast Guard that there is no administrative process for reconsidering such a finding on projects of the type proposed by BNSF.

Nykiel said that means the Coast Guard’s decision is final “in that the option left for people who are concerned is to file a lawsuit” — something ICL is currently considering, he told the Reader.

“We’re talking with an attorney now and figuring out if we will bring a lawsuit,” Nykiel said. “We’re thinking about whether or not this final EA is sufficient and whether or not it complies with the law. We’re in the midst of making those decisions.”

Among the chief concerns for ICL is the lack of analysis of the lakebed soils along the BNSF right-of-way. According to Nykiel, the railroad shared data from soil testing at sites around the proposed construction area, but not specifically where the work of building a second rail bridge would take place.

For instance, Nykiel said, results of soil analysis near the byway and Pend Oreille Bay Trail were meant to represent what could be expected at the train bridge.

“They essentially used those examples as sort of like, ‘This is our due diligence to just consider the potential for contamination in the soil,’ instead of just testing it,” he said. “As of now, there’s been no investigation or analysis of the soil in the right-of-way, where the construction would take place. They just say, ‘All soil as it’s excavated will be tested and disposed of as needed.’”

According to BNSF representative Wallace, there is “no known contamination in Lake Pend Oreille within the project area” and “there is limited potential for soils in the project area to be contaminated.” She said that in order to back up that conclusion and “provide a better understanding of how sediments travel out of the Clark Fork River,” the Coast Guard conducted a regulatory database review, consulted with Idaho Fish and Game, the Idaho Department of Environmental Quality and U.S. Fish and Wildlife Service, completing an “upstream velocity assessment,” as well.

“In compliance with the Water Quality Certification from Idaho Department of Environmental Quality and the Biological Opinion issued by U.S. Fish and Wildlife Service, the final EA specifies minimization measures that would be implemented during construction to minimize the risk of mobilizing sediments,” Wallace said.

Nykiel doesn’t quite buy the notion that there is little chance of contamination in the soils around the train bridge.

“This area has a history of legacy mining,” he said, pointing to contaminants including arsenic, cadmium, lead and zinc, to say nothing of a century of high-intensity rail use on the bridge itself.

“They have found soil contamination in the Clark Fork Delta from mines upstream — there’s reason to be concerned, it’s not just pulling things out of the air and saying, ‘You have to analyze every little thing,’” Nykiel added.

Characterizing an EIS as a mechanism to “know before you go,” Nykiel said he was “surprised at BNSF’s unwillingness to perform an EIS because I think an EIS is not only in the community’s best interest but also BNSF’s, as a company and community partner.

“I’m really not sure why BNSF has been unwilling to agree to perform an EIS,” he added. “Maybe there’s some anxiety around what the additional data and analysis might show? Or, how the public might respond to it? I’m not sure. But, BNSF has spent the better part of two years trying to avoid an EIS, which seems exceptional to me.”

When asked whether BNSF ever considered having an EIS performed based solely on public outcry — since NEPA requires only an EA — Wallace said: “It is the federal agency that decides the nature of the review. The federal regulations set forth that it’s appropriate to do an EA to determine if there are significant impacts that are not mitigated. In this case, the Coast Guard completed a very thorough review, and in the end issued a Finding of No Significant Impact based on the facts and science.”