‘Death of a Small Town in the West’ play: Not your average theater-going experience

This weekend and next, my original play “Death of a Small Town in the West” will be playing at the Panida Theater’s main stage.

The play was an important milestone for me creatively, as it was the first time I’d ever attempted to write a play. 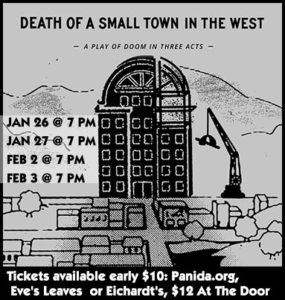 It actually started as a novel, but one wild night in 2009, I threw the whole months-long effort into the trash, dug out my typewriter and started punching the keys from scratch. One hour turned into two. Night fell and I was still churning through the pages. By 8 a.m. the next morning, with a stack of manuscript pages to show for it, I had completed the 13-hour marathon session. To date, it remains my most painful, yet most rewarding writing experience.

Weaving inside Sandpoint jokes with absurd, dark comedic events, “Death” tells the story of a town wooed by an out-of-town developer who seeks to bulldoze the entire downtown corridor so that he can rebuild it in his image. A group of disgruntled locals decide to fight back. It involves dynamite, mutants, nerve gas, bureaucracy, land rapers and the doomed democratic process.

Directed by Madeline Elliott, co-written by Chris Herron, and featuring a cast of some of Sanpdoint’s favorite actors, “Death” is sure to entertain — but it’s not for everyone. There is a healthy mix of adult language and situations, and a sense of humor is required, otherwise you’ll have no fun whatsoever.

A portion of the proceeds will benefit the Sandpoint Reader, as well as the theater production company Unknown Locals.

I hope to see you all there!

Tags: Ben Olsondeath of a small town in the westpanida theater