Cyrus the Great versus Trump the Small

Joining Sarah Huckabee Sanders, Trump’s clueless press secretary, 55 percent of white evangelicals believe that God has sent Donald Trump to save the nation. Jerry Falwell, Jr., president of evangelical Liberty University, believes that King David is the model for Trump’s reign. Falwell claims that even with all of his faults, David was still chosen by God to found the lineage from which Jesus would come. 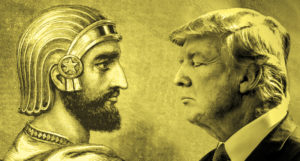 David was a great writer, allegedly giving us some of the best poetry in the Hebrew language. He was also a renowned musician, and he was called to play his lyre when Saul fell under the spell of an evil spirit. Trump is neither poet nor musician, and we have great need of a harpist to rid him of his own malevolent spirits.

David was also a great warrior, although scholars dispute whether he actually ruled over as large an area as the Bible attests. He is most famous, of course, for slaying the giant Goliath with his sling. Trump might say that he could hit any giant in the middle of the forehead with his expert golf swing, but that would be one of his many baseless boasts. Recently, however, he did hit the omelet bar at his Mar-a-Lago resort.

David would never have made an excuse not to go into battle, especially if it was a few bone spurs. We now know that Trump’s four deferments might have been a hoax. The daughters of a Brooklyn doctor reported that their father received rent reduction for  his Trump-owned office in return for the medical exemptions.

In addition, draft-dodging Trump claimed, in a 1997 interview with Howard Stern, that his “personal Vietnam” was the “real danger” of STDs in the New York dating scene. He warned that vaginas were “potential landmines,” so that’s why he now apparently prefers the safer practice of grabbing private parts instead.

David’s greatest sin was, of course, his seduction of Bathsheba and the conspiracy to kill her husband, Uriah the Hittite. As far as we know, there have been no allegations of murder in Trump’s many sexual escapades, but he has paid off at least two women for their silence. Since then, I’m sure that he has regretted not hiring a hitman for Stormy Daniels.

A writer for the conservative National Review, which has never supported Trump, speculates that King David’s head priest would have declared: “Fake news! The king was nowhere near the fighting.” He attributed the rumors to “Saulite (=Barackish) holder-overs” still in the court, and he reminded people that King Saul “had consulted witches” (=Hillary?) during his reign.

Many preachers are insisting that the best biblical model for the Trump presidency is Cyrus the Great, a Persian king from the sixth century BC. Pastor Lance Wallnau claims that in 2016, God spoke to him and told him to look at Isaiah 45. That is the chapter where God had anointed Cyrus as a messiah, because he had let the Israelites return to Palestine and rebuild their temple.

Wallnau explained that “Trump’s obvious faults and flaws only confirmed the prophecy: Cyrus, like Trump, was powerful, rich and pagan, not at all godly.” At least Wallnau has seen through Trump’s claim to be a Christian, not even a “baby Christian,” as Focus on the Family founder James Dobson once suggested.

In the eyes of Cyrus’ god Ahura Mazda (wise lord), he was very godly indeed. In his conquests of neighboring lands, Cyrus was known as merciful and kind. Instead of slaughtering people and executing their rulers in gruesome ways, he left them in place and hired many of them as his advisors. I’m sure Cyrus would have disagreed with Trump about waterboarding, and the even more brutal ways of torturing terrorists that he has promised.

Another problem with this comparison is that Trump does not like Iranian leaders. His side-kick Mike Pence calls the current government a “murderous regime.” Kim Jong Un, Trump’s favorite dictator, has killed far more people than the Iranians, who at least allow elections and have negotiated a nuclear deal with the U.S. Obama made sure that inspections have verified Iran’s compliance, but the “unartful” Trump appears ready to have given away most of the leverage we have with Kim.

Biblical numerologists are going crazy about the coincidence of the 45th chapter of Isaiah and the 45th president. Referring to the famous jibe against Freud that “sometimes a cigar is just a cigar,” I say that sometimes a coincidence just that and nothing more, except, of course, if it is a small cigar.