Affordable housing development would be a first

There has been no shortage of headlines surrounding the proposed Culver’s Crossing affordable housing development, fronted by the Bonner Community Housing Agency and its executive director, Rob Hart. 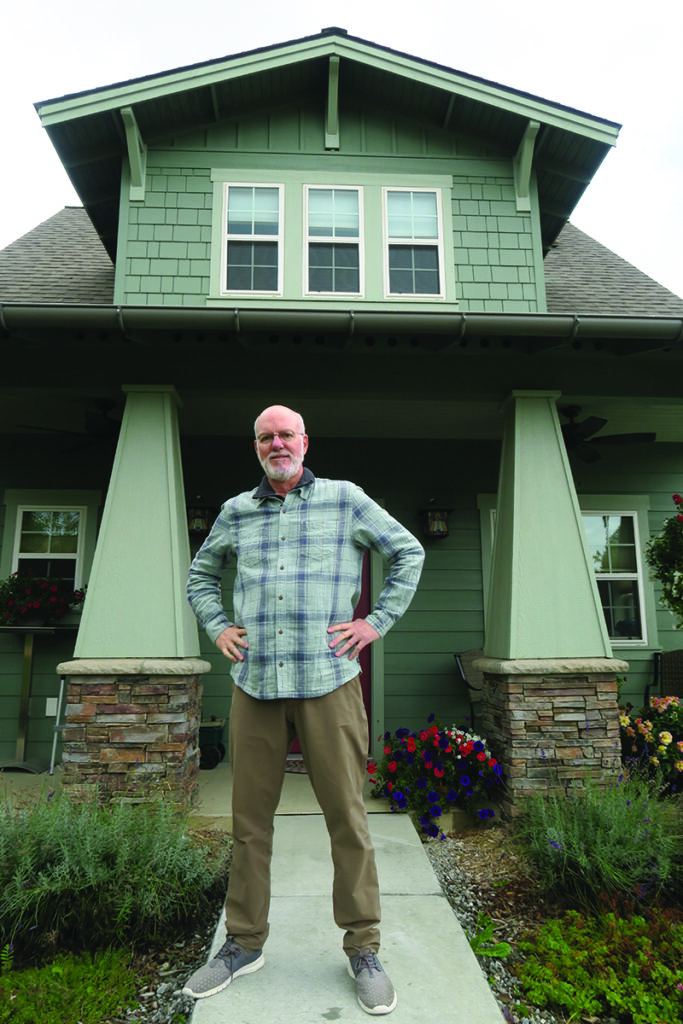 Rob Hart, the executive director of the Bonner Community Housing Agency, stands before a home in Sandpoint modeled after historic homes in South Sandpoint. Photo by Ben Olson.

During the summer and fall of 2021, when BCHA first outlined its plan to bring 49 homes to six acres west of Boyer Avenue — all of which would be attainable to middle-income buyers — it made the news from Boise to Spokane to Sandpoint.

“Landowner, developer partner to keep investors out of new N. Idaho housing development,” the Idaho Capital Sun wrote. “Can a new approach to affordable housing keep the middle class in booming Bonner County?” the Spokesman-Review wrote. As the Reader put it in Part 3 of its “Where are all the workers?” series in September 2021, BCHA’s plan could be “a homegrown solution to affordable workforce housing.”

Now the proposal is due to receive its first public presentation before the Sandpoint Planning and Zoning Commission on Tuesday, April 5, and Hart is hoping it’s the beginning of a workable pathway to easing the ongoing local affordable housing crunch, which has generated a lot of buzz but, so far, little action.

“This will be the first time, as far as I know, that a private person is coming forward to present on affordable housing,” he told the Reader in an interview March 28. “We’re just trying to get a groundswell so folks on the P&Z Commission know this isn’t an ordinary project.”

Hart said Culver’s Crossing has already drawn more than 30 letters of support from area residents, who likewise hope that by structuring the development to be available only to average area wage-earners it will mean protecting the local workforce while adding to housing inventory in Sandpoint.

“If you’re an investor, a speculator, don’t contact us,” he said, referring to the interview process through which prospective buyers must go before being considered for purchasing one of the Culver’s Crossing homes. “This is just for regular people; this is not Section 8 low-income housing, it’s for working people in the Sandpoint area. That’s who we’re trying to help.”

While the greater Sandpoint area has experienced an historic development boom over the past two or so years, the Culver’s Crossing project is unique in that it is a planned unit development on land owned by local resident Nancy Hadley, who has partnered with BCHA to make her acreage available for building.

Because of that arrangement, BCHA is able to offer income-based housing geared toward local employees, seniors and disabled residents who make between 60% and 120% of the area median income, which is pegged at about $60,000 per year.

According to Hart, homes in the Culver’s Crossing development will come in a variety of styles — including twin and single-family homes — clustered in density among park spaces, a greenbelt and mature trees, which are being retained on the site rather than clear-cut, as is common practice among most housing developments.

“It’s a completely different dynamic for how it feels,” he said, going on to describe the proposed streetscape as “non-linear,” meaning the neighborhood will incorporate intentional turns to reduce traffic speeds.

“We really want this to feel comfortable, so kids feel safe without cars screaming around the corner,” he said.

Ensuring affordability and accessibility to locals is paramount for the project, Hart said, pointing to the housing program itself, which incentivizes buyers to hold onto their homes for at least four years. For instance, during that time, a buyer is free to sell their home in Culver’s Crossing but Hadley has the right of first refusal to buy back the home for its original sale price, plus appreciation for inflation, depending on how many years the buyer has been in the home. On the first day of the fifth year of occupancy, the occupant is free to sell for whatever price the market will bear.

“You’re not going to lose money,” Hart said of selling during the first four years, but, “this is to discourage speculators and investors. What this encourages is people not to flip the homes.”

Looking at the local housing market in general, Hart added that inventory isn’t quite the problem that it’s often made out to be — especially by developers, who have a vested interest in bringing more units onto a red-hot market. Rather, it’s the allocation of housing, with a considerable chunk of the residential building stock sitting idle for much of the year in the hands of absentee or seasonal owners.

“I would guess that 30% to 40% are not occupied 12 months out of the year,” he said. “That’s how the market works. But what we can do is carve out six acres and say, ‘We can do it different here,’ and we want to find more landowners who want to do that.”

Another way that Culver’s Crossing would be different is that BCHA itself handles the transaction, rather than a realtor in the middle, taking commission. While that might suggest real estate professionals would look askance at the project, Hart said that those he’s spoken with have welcomed the model.

There’s still a long way to go for Culver’s Crossing, though. Hart said the April 5 hearing before P&Z is but one step of many that, if successful, would culminate with approval from the Sandpoint City Council — which he hopes will occur in time to deliver the homes next year.

“What we’re doing is we’re saying, ‘Here’s some good planning,’” Hart said. “We’re creating the path that others can follow.”

For more information visit bonnerhousing.org. The Tuesday, April 5 Sandpoint Planning and Zoning Commission meeting begins at 5:30 p.m. at the Sandpoint City Hall (1123 W. Lake St.) For more information, and to access the meeting via Zoom, go to sandpointidaho.gov and click on “Meetings” on the homepage.