When the going got tough, the Stillhouse Junkies got creative.

When the pandemic put a hold on live music in spring 2020, Colorado string trio Stillhouse Junkies — Fred Kosak, Cody Tinnin and Alissa Wolf — had to cancel 200 shows, including their first ever international tour. As an alternative, they launched the Rolling Junkies Revue.

“We hopped in our van and had folks in our local community sign up for 30-minute acoustic sets in their front yards and driveways,” Tinnin said. 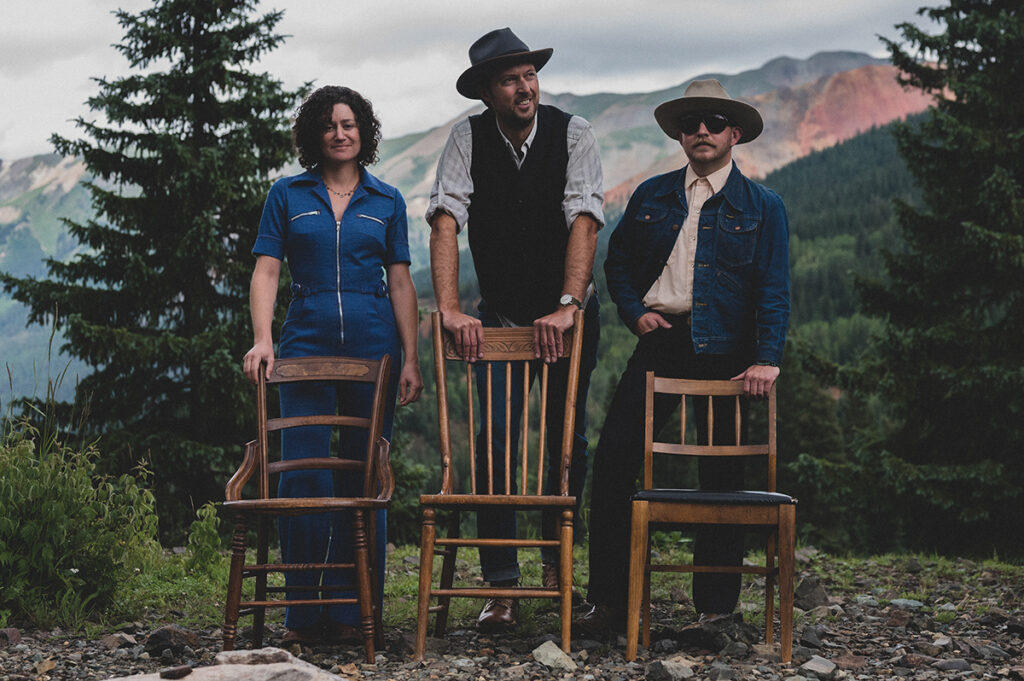 The Rolling Revue, along with a ticketed nine-part online concert series, kept the Stillhouse Junkies doing what they loved, and even gained the recognition of the International Bluegrass Music Awards. The band has been nominated for the 2021 IBMA Momentum Award, which recognizes innovative moves by bands early in their careers. The awards will take place in September, with the Stillhouse Junkies performing at the event as a showcase band.

“To have that kind of recognition from the IBMAs — it’s very humbling,” Tinnin said. “We’re very proud of that.”

But before they can hit up the IBMAs, the Stillhouse Junkies are spending the summer on an extensive tour, including a stop in Sandpoint’s Farmin Park on Thursday, Aug. 26 at 6 p.m. as part of the free and family-friendly Sandpoint Summer Series.

Kosak started the Stillhouse Junkies in 2017, the band earning its name as it played every Friday night in a small distillery in Durango, Colo. Over the years the band’s configuration has evolved into its current makeup: Kosak on guitar and mandolin, Tinnin on standup bass and Wolf on fiddle. All three musicians contribute vocals.

“The string band market, especially in Colorado, is pretty crowded, so we try to do our own thing in a way that people will hopefully remember when they walk away from a show,” Kosak said. “The highest compliment we can get is when people say, ‘I don’t even know what to call you guys,’ which is what we’re going for. … I’m sure there are many strategic reasons to try to be more consistent with your sound, but we want to make musical chaos our calling card — where you don’t get an easy handle on what we do by hearing a couple songs.”

Despite a tendency toward chaos, the Stillhouse Junkies are clearly refined musicians. Rather than shy entirely away from bluegrass sound, this trio leans hard into the traditions of storytelling and white-hot jam sessions to create immensely emotive and fun music — more of which is on the way soon, according to Wolf.

“If you come to our shows, including Sandpoint, you’re going to get to hear a lot of those tunes that we haven’t recorded yet,” she said.

The Junkies’ show Aug. 26 will mark the third and final performance in the 2021 Sandpoint Summer Series — free concerts put on by local outfit Mattox Farm Productions.

“The series has gone great this year,” said Mattox Farm founder Robb Talbott. “The attendance has exceeded expectations. Both bands and concert goers have all seemed very pleased and happy to be together again.”

Talbott started the series in 2019, but put it on hold in 2020. He said it’s been a challenge to relaunch in 2021, but all signs point toward the series being a beloved community event. The Talbotts have also welcomed two children into their family over the past couple of years, further motivating them to keep the family-friendly shows alive.

“My wife and I feel that it is important to have events like this, where our community can gather and enjoy a variety of music in a safe environment,” Talbott said. “And the community has spoken loudly by supporting the series — the sponsors have been amazing, attendance has been great, and the volunteers that come out to help set up and tear down let us know we are on the right track.”

“We’re trying to stay busy,” Tinnin said. “It’s been a crazy last year and half, but we are very motivated to do this and we’re just really thankful that we get to do it. We’ll keep on keeping on as long as we can.”

Listen to the Stillhouse Junkies at stillhousejunkies.com, or wherever you get your music.