In any job, practice makes perfect, and that’s doubly true when human lives are on the line.

This week at Bonner County Emergency Management, practice is the order of the day as state and local authorities work with federal agencies to test emergency management procedures and infrastructure. Training in North Idaho started Tuesday and continues until Friday, with Bonner County activities taking place Thursday, June 9. 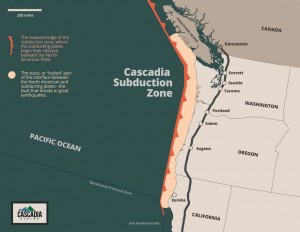 The Cascadia Subduction Zone off the coast of North America spans from northern California to southern British Columbia. This subduction zone can produce earthquakes as large as magnitude 9 and corresponding tsunamis.

“We’ll work with [other agencies] to see what our successes are and see what changes or improvements we need to make for the future,” said Bob Howard, director of Bonner County Emergency Management.

The practice sessions are specifically related to the Cascadia Subduction zone, a convergent plate boundary stretching from Vancouver Island to California. Geological experts predict that sooner or later, that plate will slip, triggering a 9.0 earthquake along the western coast and creating an unprecedented disaster. According to some studies, the event is likely to take place within the next 50 years.

While Idaho is likely far enough inland that damage from the quake will be minor compared to coastal states, Howard said the event would still test infrastructure and emergency planning. The biggest impact would come from people fleeing devastated coastal cities. The influx of people would put Bonner County’s housing, electrical grid, Internet services and medical care to the test.

“If we start receiving a lot of people from western Washington, we’re going to need to locate places for them to stay,” Howard said. “We’d have to find places to put people in shelters, set up temporary housing, find alternate food sources and more.”

The training taking place this week should better prepare Bonner County for that possibility, Howard said. Dubbed Cascadia Rising, it’s just one branch of a large-scale training campaign occurring in communities throughout the western states. The idea is to treat the event as if it actually happened. To that end, newspapers have published stories, governors have issued statements and emergency personnel have mobilized in response to the mock crisis. Oregon Gov. Kate Brown gave a speech Tuesday kicking off the training as though the crisis was ongoing.

“The ground will shake for four to six minutes, buildings and bridges will fall, landslides will sweep down hillsides and in some places the ground will liquefy,” she said. “Then a tsunami will inundate the coast with as little as 15 minutes warning.”

Gov. C.L. “Butch” Otter got in on the action too. He issued a video statement informing the public of the Cascadia Rising training and educate the public about planning for the worst.

It’s just as important that you and your family be prepared for any type of emergency, so develop a family communications plan and start building your emergency kits to include non-perishable food and water,” he said.

According to federal officials, more than 20,000 people will be involved in the training exercise. In Bonner County, that will include emergency workers and officials from the Idaho Bureau of Homeland Security, FEMA and the nine northernmost counties of Idaho. Practical exercises will put current procedures to the test. For example, more than 50 volunteers will help Bonner General Health staffers learn how to handle huge spikes in demand for medical care.

The training exercises will include staff members from law enforcement, fire protection, hospitals and more. Others, like amateur ham radio operators, will learn how they can lend their skills when more conventional forms of communication are knocked out.

According to Howard, the training exercises will almost certainly produce recommendations to improve procedure and enhance responsiveness during emergencies. That’s his assessment based on his  experience in similar training scenarios.

“In my years doing exercises, you always come out with recommendations for potential changes,” he said. “It’s the best way to identify problems before we have an actual event.”