The fate of Reclaim Idaho’s Medicaid for Idaho campaign is now in the hands of county clerks across the state. On May 1, the group submitted more than 60,000 signatures for verification. They needed 56,192 to qualify Medicaid expansion for Idaho’s November ballot. 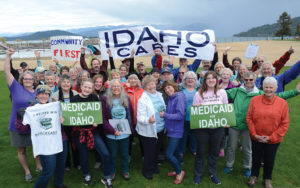 Reclaim Idaho announced on their Facebook page Monday that they’d well surpassed the ballot initiative requirement of gathering signatures from 6 percent of Idaho voters and 6 percent of voters in at least 18 districts.

“This initiative would bring health care coverage to those who need it the most, and it will allow Idahoans to decide what we want in our healthcare system, no matter what politicians in Boise or Washington, D.C. do,” said Emily Strizich, co-founder of Reclaim Idaho.

Medicaid expansion is estimated to bring health care to nearly 62,000 Idahoans, according to Reclaim Idaho.

County clerks have until June 30 to validate the signatures and all petitions must be submitted to the Secretary of State July 6.

If the initiative qualifies, voters throughout Idaho will see it on the general election ballot on Nov. 6.