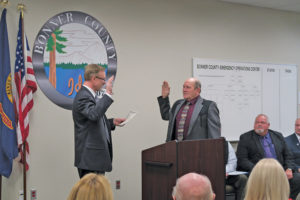 Bailey lost the Republican primary to Steven Bradshaw, who went on to secure the District 1 commissioner seat in the November election.

“It’s been a pleasure serving Bonner County,” Bailey said. “Life goes on. There are changes, but that’s the power of the vote, and we all appreciate that. That is what America is all about.”

County Clerk Mike Rosedale thanked Bailey at the ceremony, recalling a time when morning routines came up in a conversation they had. Rosedale remembered Bailey saying he started each morning with a prayer, 70 pushups, 30 pull-ups and then target practice at 1,200 yards.

“Now 80 pushups, and 60 pull-ups,” Bailey interjected, prompting laughter from the crowd. “You gotta be well rounded.”

McDonald took the oath to begin his second term as District 3 commissioner, thanking everyone who helped him with his campaign.

“Were it not for them, I don’t know if I could have won again,” he said.

Bradshaw, following his oath, mentioned that in his sermon at the Cocolalla Cowboy Church the day prior he told everyone he intended to keep a reminder of Psalms 19:14 in his county office, which asks that words of the mouth and meditations of the heart be pleasing to the Lord.

“I want to thank everybody in Bonner County that voted, regardless of who you voted for,” he said. “It’s going to be an honor to serve for you.”

The first order of business for the new BOCC was to elect a new chairman, as Bailey previously held the title. McDonald and Bradshaw nominated District 2 Commissioner Jeff Connolly, who used the moment to thank Bailey for his guidance while they served on the board together.

“When I came into office I was pretty sure I had it all figured out, but obviously we learn as we go, and I’m still learning everyday,” he said. “Glen was a great mentor.”

Connolly went on to swear in other recently elected officials, including Assessor Donna Gow, who thanked her family and campaign officials.

“I feel I am truly blessed in that I have inherited a great staff in both the Assessor’s Office and the Department of Motor Vehicles,” she said.

Rosedale was sworn in for his second term as county clerk, and Robert Beers made the oath of county coroner. Both thanked the voters, though acknowledged that they ran unopposed. County Treasurer Cheryl Piehl was sick Monday, but was sworn in before the ceremony.

Connolly noted his excitement for what’s to come for Bonner County as he closed the ceremony.

“We feel like we’re moving in the right direction,” he said. “Sometimes we get a little bit of flack for that, (and) I think some of the changes we’ve made have been fairly painful, but in the end they are the right decisions moving forward to keep this county whole and prosperous.”