Bonner County commissioners unanimously approved a conditional use permit for an asphalt batch plant in Sagle Friday. The decision followed a citizen appeal which claimed the county’s planning and zoning board unjustly approved the permit in November. 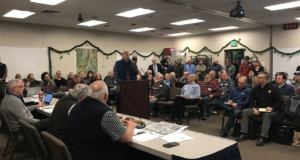 The five-hour hearing saw a packed house in the first floor conference room of the Bonner County Administration Building, with attendance pushing 100. The BOCC, which acts as a judicial body when appeals are filed against the P&Z board, first heard a summary of the batch plant proposal from the P&Z department, then from the permit applicant — Interstate Concrete and Asphalt — and finally from nearly 40 concerned citizens, almost all from the Sagle neighborhood where the proposed plant would be located just off Highway 95 in the Linscott gravel pit.

Representatives from Interstate said the plan is to move their current asphalt plant from Baldy Mountain Road to the Sagle gravel pit, where they already get their raw materials. The move is meant to mitigate the extra miles it takes to transport the raw materials into Sandpoint and then back out to paving projects, with an emphasis on how the move could improve safety for all involved. Interstate’s Engineer of Record, Steve Syrcle, noted that the company’s trucks are currently trucking raw materials 7.7 miles one way to reach the Baldy batch plant.

“That’s across the Long Bridge, through downtown, through school zones, across railroad tracks and back,” Syrcle said.

Sagle residents showed up in full force to voice their concerns about the noise, smell and environmental and health impacts the batch plant might create. Many recalled temporary plants in the pit, including resident Corene Jones, who attributed her asthma to those temporary operations.

“Your decision today will seal my fate,” she said. “I can tell you from experience that it affected me … I get the very clear message from Interstate that I don’t matter in regards to my breathing and my home ownership there.”

Interstate and the county say they have no complaints on record from Jones or her concerned neighbors during those temporary operations, but Jones claims the evidence is inaccessible due to a computer system crash within the Bonner County Sheriff’s Office.

Other landowners shared concerns that living near an asphalt plant may exacerbate pre-existing health conditions, and they may be forced to move. Many said the proposal violated county code, citing a portion which states “the proposed use will not create a hazard nor be dangerous to persons on or adjacent to the property.”

A point of main concern was the aquifer running beneath a portion of the Linscott pit. Hydrogeologist Gene St. Godard went on record for Interstate to say it is “highly unlikely” any toxic material would reach groundwater given an accident on the property. Still, the BOCC said they hope the Southside Water and Sewer District does not hesitate to do more frequent water testing. The Southside Water and Sewer District did not have a representative at the hearing.

P&Z Land Use Planner Sam Ross noted that environmental concerns are deferred to other agencies like the Idaho Department of Environmental Quality, and that conditions were added to the permit to ensure any possible hazards are addressed by those agencies and documentation of compliance is then supplied to Bonner County P&Z.

Residents expressed several times throughout the hearing that they felt only getting three minutes to speak when Interstate had no time limit resulted in unfair representation. Sagle resident James Pound said the BOCC should be representing the public’s wishes with their vote.

McDonald explained the board’s role not as representatives of the people during the hearing, but instead as a “quasi-judicial board” meant to determine whether Interstate’s application met lawful requirements.

“We’ve had people say, ‘Well, 40 people showed up against this and only five people spoke for it, I can’t believe you guys voted for this,’” McDonald said. “But we’re not voting for or against anyone. What we’re doing is following law.”

When it came time to vote, Commissioner Jeff Connolly lauded Interstate’s clean track record, noting the company has been a “good neighbor.” Bailey said concerns raised during the hearing were largely addressed in conditions P&Z added to the conditional use permit.

“I understand we can seem to be cold and heartless. I apologize for that,” Bailey said just prior to the unanimous vote in favor of granting the permit. “We do take seriously your concerns and your issues. We have to make our decisions based on the facts.”

No timeline is set for the construction of the asphalt plant. Interstate still needs to obtain permits from other agencies before moving forward.