Kochava kicks off move with a bang

Kochava is moving on up to a bigger set of digs, and the Sandpoint-based business is attracting some big names to celebrate the occasion. 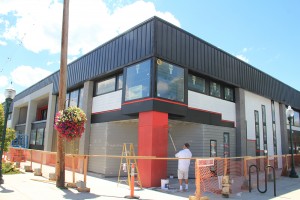 Workers put the finishing touches on the Bonner Building where the Inkwell used to be located.

The tech company, which provides analytics services for mobile devices, is hosting a ribbon-cutting for its new, 32,000-square foot headquarters. Idaho Gov. C.L. “Butch” Otter is visiting Sandpoint to join Sandpoint Mayor Shelby Rognstad and Kochava CEO Charles Manning in marking the occasion. Representatives of some of Kochava’s biggest clients, including Amazon, AOL, Disney, Google, Hilton, Priceline, and Turner Broadcast will also be in attendance.

“[The move] started with the thought: Rather than building a campus, let’s make downtown our campus,” said Charles Manning, Kochava founder and CEO.  “The new 32,000 sq. ft. state-of-the-art facility is in the heart of downtown, adjacent to the lake, mountains, and skiing, where our employees literally have a two-minute commute to the office.”

Following the ribbon-cutting, Kochava will begin moving into the new facility, a task likely to be completed in August. According to Jeremy Grimm, Kochava director of publisher development, the new building, located at 201 Church St., was a labor of love involving several Sandpoint contractors.

“We were thrilled to be able to work with so many talented local contractors and tradesmen during this project,” Grimm said.

Kochava’s move to the new facility is yet another milestone for a local company that has experienced remarkable growth in a few short years. The business has already outgrown one facility on First Avenue, necessitating its move to a suite in the Columbia Bank building. Along the way, Kochava ballooned from 32 employees in 2014 to a current staff of 80, with 20 more jobs expected by the end of the year.

According to Manning, Kochava is an attractive prospect for many software development and tech professionals. It’s a chance to pursue a career while avoiding the bustle and stress of the West Coast.

“Many recruits are thrilled to have the opportunity to work for a leader in the tech industry while living in Rand McNally’s ‘Most Beautiful Small Town in America,’” Manning said. “Our new headquarters will allows us to continue to innovate and build a company based on value-add products that truly benefit our clients, our employees and our community.”