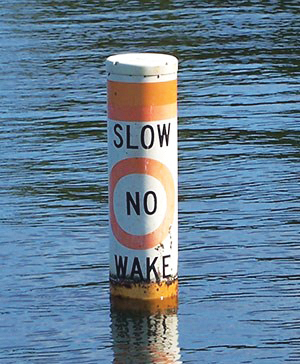 The emergency stems from snow melt, warming temperatures and rain leading to “forecasted flooding” posing a “threat to life and property” in Bonner County, according to the resolution authorizing the no wake zone extension.

“We implemented the [temporarily extended] No Wake Zone because of high water levels and a lot of floating debris,” Bonner County Emergency Management Director Bob Howard told the Reader. “Also, no wake will assist in preventing additional damage to shorelines. Lastly, it is about boater safety on our navigable waters.”

Under regular county code, the no wake zones are 100 feet on most local rivers and 200 feet on lakes and the Pend Oreille River. The 500-foot rule will remain in effect until flooding “is no longer an issue,” according to the June 21 resolution.

“Until further notice, the wake zone is extended to 500 feet from any dock, shore or structure, due to high water levels that are projected to continue rising,” the Bonner County Sheriff’s Office shared on its Facebook page. “It is important for boaters to recognize the potential dangers associated with large wakes during these conditions that can cause water to flow onto shore, causing an increased risk of personal injury or property damage.

“More importantly, boaters should remember they can be held liable for damages caused by their wakes,” the BCSO post continued.

Apart from the shoreline damage that can happen during runoff periods, Lake Pend Oreille may also be more susceptible to debris in the spring as aggressive inflows from the Clark Fork River and other waterways bring tree limbs and other hazards downstream.

The Army Corps of Engineers has detected a breach at the Clark Fork Driftyard, where booms have dislodged and allowed logs and other debris to enter the lake.

“The sheriff’s office can mark large hazards. However, there is a lot of debris that cannot be marked,” BCSO officials shared online. “Please remember [the] U.S. Coast Guard regulations require every boater maintain a proper lookout to avoid damage or injuries sustained during collisions with other vessels or objects in the water.”

As of June 22, Idaho’s panhandle region had 1,241% of its average snow-water equivalent as compared to historical data on the same date, indicating that there is still more water due to enter the lakes and rivers as runoff continues. Also on June 22, Lake Pend Oreille hovered just below summer pool level, which is considered 2,062 feet.