Chamber honors Marcella Nelson as April Volunteer of the Month

The Greater Sandpoint Chamber of Commerce was pleased to present Marcella Nelson with April’s Volunteer of the Month certificate at its April 8 general membership luncheon.

Every resident of Bonner or Boundary County ought to be aware of Nelson’s many contributions to local nonprofits over the decades. Most are probably not aware of her expansive professional career before dedicating her life to these charities. 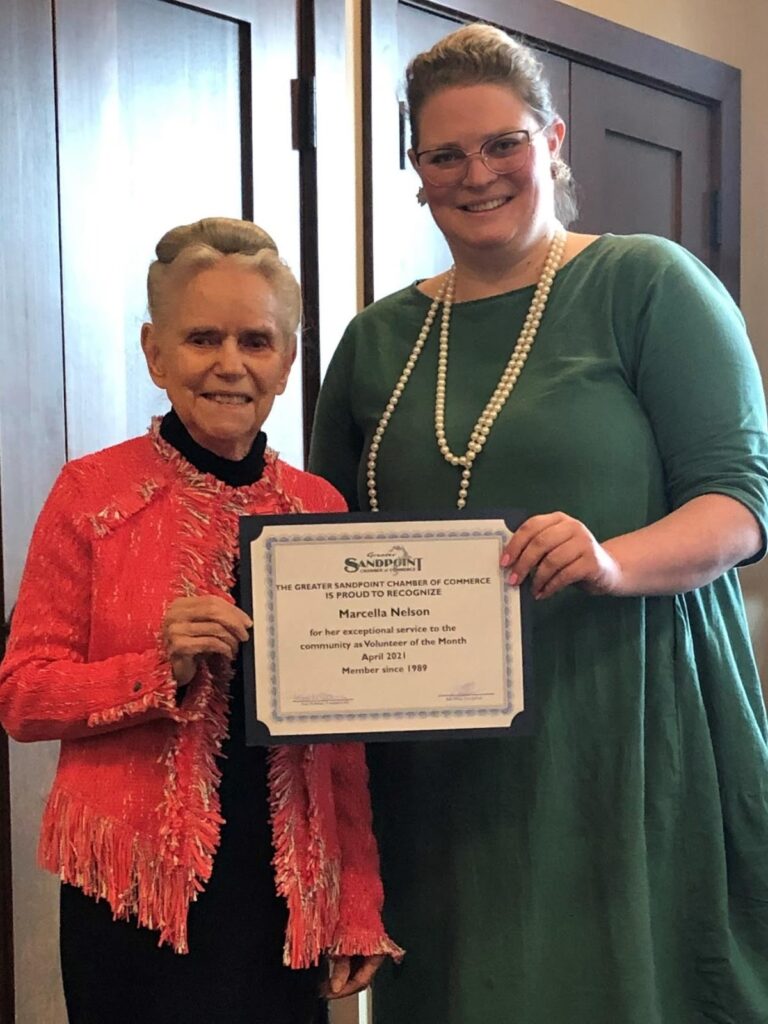 Marcella Nelson is presented with her Volunteer of the Month certificate by Greater Sandpoint Chamber of Commerce staffer Ricci Witte. Courtesy photo.

Nelson was born in Saskatchewan, Canada, in 1928 to U.S.-born parents and lived there for three years. Her family then moved to Lewiston and eventually settled in Bonners Ferry, where she grew up on the family farm.

While still in school, Nelson’s first job was as a farm hand, until 1947, when she began a long career with what is now known as the Department of Labor. Nelson worked there for the following 37 years under various job titles: stenographer, interviewer, claims examiner, employment counselor, unemployment claims supervisor, assistant manager and office manager, just to name a few.

Nelson retired from the Department of Labor in 1984 and, after just three days of living the good life, realized retirement wasn’t for her. Responding to an ad in the Daily Bee for a position with the Greater Sandpoint Chamber of Commerce, Nelson got the job and held it for the next 20 years.

The Ponderay Community Development Corporation asked her to serve as its manager in 2004, in which position she served for nearly 10 years. When she “retired” once again — having worked for 67 years — she dedicated her time to volunteering.

Today, Nelson serves on the boards of the Pend Oreille Arts Council, Festival at Sandpoint and Ponderay Rotary. She is also a member of the Greater Sandpoint Chamber of Commerce, Bonner General Health Advisory Council and Community Assistance League. She is also a supporter of Kinderhaven; the Panhandle Alliance for Education; the Panida Theater (where she was a longtime board member); Women of Wisdom; and the Litehouse YMCA, in whose gym she has practiced aerobics since its predecessor, Sandpoint West Athletic Club, opened in 1984.

Many of her fellow board members speculate on how she can convince people to donate so much to so many causes, or whence her seemingly endless energy comes. Their only explanation: “The Power of the Bun” — that being a reference to her signature hairstyle.

With most events canceled due to COVID-19, Nelson missed the in-person meetings but that didn’t slow her down — she managed to adapt well to the new world of Zoom, which was quite an accomplishment for a farm girl born in 1928.

If anyone has ever deserved to be honored for their volunteerism, it is Marcella Nelson. That is why the GSCoC stated it was “exceedingly proud to honor Nelson as its April 2021 Volunteer of the Month.”