Calling it “probably the most difficult decision I’ve made in four years, and I think it is too for this council,” Sandpoint Mayor Shelby Rognstad cast the tie-breaking vote in a decision Oct. 16 to approve a design concept for War Memorial Field that would replace its grass surface with artificial turf, and authorize a request for quotes for engineering services to do the job.

City Council President Shannon Williamson joined Councilmembers Joel Aispuro and Bill Aitken in voting against the RFQ, all three citing the need for more time to consider alternatives — including, in Williamson’s case, pressing for a separate data set illustrating the comparative costs of retaining a grass field. 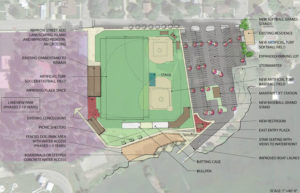 “I’m trying to find a middle ground where we can pursue any opportunity to gather more information,” she said.

According to City Administrator Jennifer Stapleton, that would require an entirely new design concept, as consultant firm GreenPlay, which the city has contracted to formulate the designs in its Parks and Recreation Master Plan, only presented an option including synthetic turf. Coming up with a new concept would require a substantial expenditure and push back any improvements to Memorial Field to 2021.

“This design is based on artificial turf. It’s the only way this design works,” she said. “This would have to be redesigned.”

Councilmembers John Darling, Deb Ruehle and Tom Eddy voted in favor of the RFQ, with Ruehle stressing that, “None of the decisions we make up here are easy.”

While there are “infinite shades of gray” in the considerations around the field surface, “the decision is black-and-white,” she said.

“We’ve kicked this can around a lot. … I think we need to stop kicking the can down the road,” Ruehle added.

As presented by GreenPlay, the Memorial Field concept includes a combination soccer/football/lacrosse field as well as new baseball and softball fields — all with synthetic turf and overlapping one another at various points. The parking lot would also be increased in size and boat launch area altered to include a boardwalk or stepped concrete water access. Other elements include a new restroom and east entry plaza, new softball grandstands, a batting cage and bullpen.

Though by design only one team could play a game on the field at a time, proponents of the concept cited the ability for multiple teams to practice at once, as well as extend playability into the spring and even winter, when wet weather renders the grass playing surface unusable. 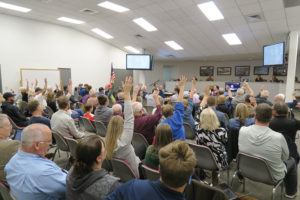 “I’ve thought long and hard and what it boils down to for all the years I’ve been working for Parks and Recreation — and I’ve been doing this for 33 years — is that in the spring kids have no place to play,” said Sandpoint Parks and Rec. Director Kim Woodruff.

According to Stapleton, the city is prepared to submit the RFQ for engineering services as early as Oct. 17. The proposal would then come back to the council at its Wednesday, Nov. 20 meeting, at which time it would select an engineer who would move forward with construction design, phasing construction and establishing largest-magnitude costs. The final design could come forward at the beginning of February 2020, including different artificial turf options and selections. A construction bid would be selected by the council on March 18, 2020 with the first phase of construction proceeding from April 1-July 31, 2020 — a timeline, Stapleton said, that accommodates the Festival at Sandpoint, which typically hosts its summer concert series in the first and second weeks of August.

“This is our best-case scenario,” she said.

Testimony was split almost as evenly as the council vote, with a packed audience expressing pro and con opinions within a margin of about five individuals.

How the new synthetic turf design would affect the Festival was a prime concern for a majority of those who spoke against the proposal.

Festival Board Vice President Bob Witte offered his testimony on behalf of the nonprofit, telling the council, “It’s no secret that we’re in favor of natural turf there. We’re very proud of the field.”

He went on to describe Sandpoint as a “natural town, and we feel this takes away from the aesthetics of the field.”

As with many others who testified against approving the RFQ, Witte said that the suggested benefits to playability and multi-use offered by synthetic turf might be put to better use at Travers Park or the Great Northern Sports Complex, leaving Memorial Field as it is.

That said, he added, “We are willing to give it a try. We just don’t know. We’ve never done it; it could turn out to be fine. … It could turn out that we have to go somewhere else because it’s not economically feasible and we can’t work it out.”

For the Festival, much will depend on the timing of construction. This time of year is when the organization locks in its booking for the season, and it’s already about a month behind on that. As it is, the Festival “needs some sort of guarantee that if you go artificial, it’s going to be done,” Witte said. Otherwise, if the organization books acts and the field isn’t ready on time, it may be forced to pay back contract deposits to artists running into the hundreds of thousands of dollars.

For others who testified, Memorial Field has always been a sports facility first, and a concert venue second.

“The field is meant to be a field. For Sports,” testified Sandpoint resident Amelia Boyd.

As Rognstad said near the close of the discussion, which lasted about three hours, the overall benefits of synthetic turf “far outweigh” the drawbacks put forward by some.

“It would take many fields to accomplish this level of playability,” he said.